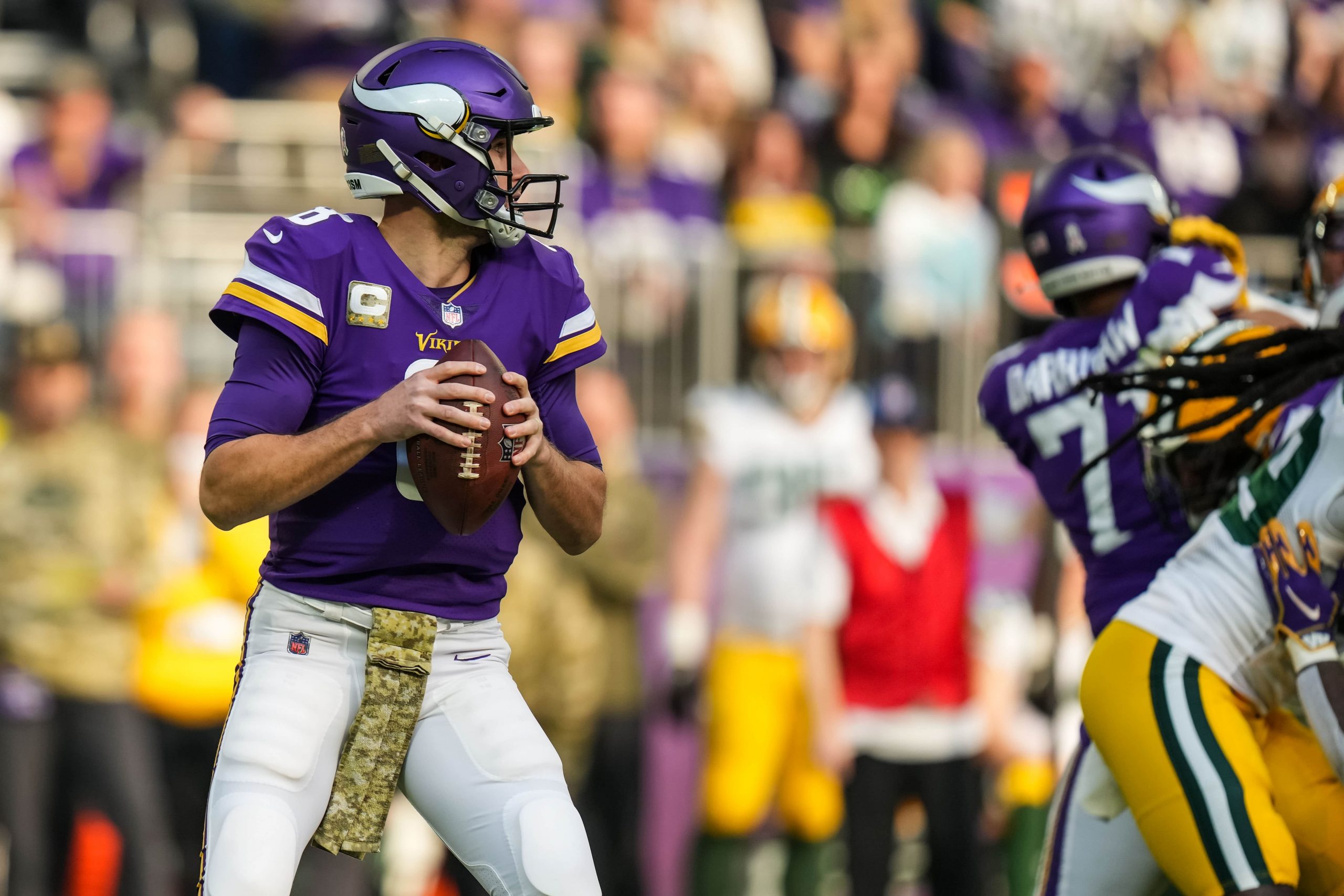 It’s Thanksgiving Week and I have a lot to be thankful for this year. First of all, the ability to connect with you, Pickswise Nation, on a regular basis has been very rewarding over the past few months. I truly love what I do, and as my platform continues to grow, I feel an even greater responsibility to improve the quality and consistency of the content I provide.

Secondly, this NFL season has been incredibly impactful for me as a handicapper. I’m grateful for the opportunity to connect with bookmakers and other handicappers, which has allowed my perspective and strategies to grow. I hope you are enjoying the video and written content, and I wish everyone a happy Thanksgiving! Onto this week’s selections.

Both of these teams have resurrected their seasons over the past few weeks, especially Minnesota. The Vikings have won two straight games as an underdog, the first time Kirk Cousins has ever accomplished that feat during his four-year tenure with Minnesota. Despite that, the line movement is favoring the 49ers, and I’ve even seen a couple of shops move through the key number to 3.5.

“Everyone is hyping up Cousins after that performance and we all know what that usually means, that QB/team has a bad game,” said TwinSpires Trading Analyst Zachary Lucas. “San Francisco seems to finally be utilizing their playmakers a lot better. I can’t see the Vikings’ defense slowing them down. San Fran seems like the right side to me.”

The biggest question surrounding this game is the health of quarterback Lamar Jackson, who was a surprise inactive on Sunday despite practicing earlier in the week with an undisclosed non-COVID illness. The early line movement favors the Browns, as I’ve seen a couple of shops move this line down to 3.5. WynnBET is reporting 80% of the early handle on Cleveland, and it’s their highest handle game of the week thus far.

“This Browns team is still one of the most talented and complete teams when healthy; they just haven’t been playing like it,” said WynnBET Trader Sawyer Johnson. “I think at this point we can assume Lamar will be fully healthy.”

These teams are relatively evenly matched on paper, Cleveland has the edge in Net Yards per Play, but Baltimore has the stronger DVOA. The deciding factor for me here was the return of RT Jack Conklin and RB Nick Chubb for the Browns. The physicality for Cleveland in the trenches, plus the fact that I’m getting over a field goal, makes this a strong play for me.

*Bet on Wednesday at DraftKings, lines widely available at time of posting

The return of Mike Vrabel to Foxboro has seen a ton of movement towards the Patriots from a lookahead of -2.5 all the way to -6.5 at some shops. It’s tough to doubt Vrabel’s coaching ability, especially as an underdog. The Titans are 14-6 against the number and 13-7 straight up under Vrabel as a dog of more than a field goal, however, all of those games were with the battering ram Derrick Henry in the backfield.

“I think the Titans can keep this close because I envision a slow, low scoring game, but I have a hard time seeing them scoring points on this Pats defense,” said WynnBET Trader Sawyer Johnson.

The Dolphins are my favorite teaser spot of the week, as I can’t envision Cam Newton going down to Miami and winning by more than one score. The Panthers offense was limited to 297 total yards in Sunday’s loss to Washignton, which is troubling considering the Football Team is allowing nearly 6.0 yards per play this season.

“It’s tough to bet on Cam in general,” said WynnBet Trader Sawyer Johnson. “He was run out of town in Carolina and New England for a reason.”

Tua was very efficient against the Jets last week, completing 27-of-33 passes with 8.0 yards per attempt. This will be just his 18th career game, so in football years, Tua is just starting his second season, and as long as he’s healthy, the Dolphins have the edge under center in this game.

Raiders/Cowboys u51.5: If Thursday’s NFL card was your Thanksgiving plate, then this pick would be the green bean casserole. Nobody likes betting unders, but the line movement and trends really stand out to me. After opening at 54, this total has dropped significantly down to that key number of 51, which is the most landed on total in the NFL over the last five years. I saw this total creep back up to 51.5 on Wednesday, with news that CeeDee Lamb might be able to suit up. That does not change the handicap much for me, and actually offers slightly more value to the Under. The Raiders offense has been brutal since the bye, scoring just 43 points in three games against the Giants, Chiefs and Bengals.

Josh Allen o6.5 Rush Attempts +106: The Saints were gashed by Jalen Hurts last week to the tune of 18 rushing attempts for 69 yards and three touchdowns. I expect New Orleans to play better on defense this week, but Josh Allen’s legs become a bigger factor when the lights are shining brightest. Allen’s most attempts this season all came in games against playoff contenders (11 at Chiefs, 9 at Titans, 9 vs. Steelers). This will be his second game on Thanksgiving day, but his first in primetime, and I expect him to be the centerpiece of Buffalo’s ground attack. The only sportsbook I could find this prop at was FanDuel.

Lions +13/Raiders +17.5/Saints +16, 10-Point Teaser -120: This is a Thanksgiving tradition for me, and is the only day all season where I will play a teaser of this length and size. It’s never a good idea to tease through zero, so I’ll move all three underdogs up to two scores or longer. The Saints scare me the most, as their roster has been decimated with injuries. Of all three of my Thanksgiving Day bets, I like this one the least, so manage your risk accordingly.

Find out the Thanksgiving best bets from five of our NFL experts!