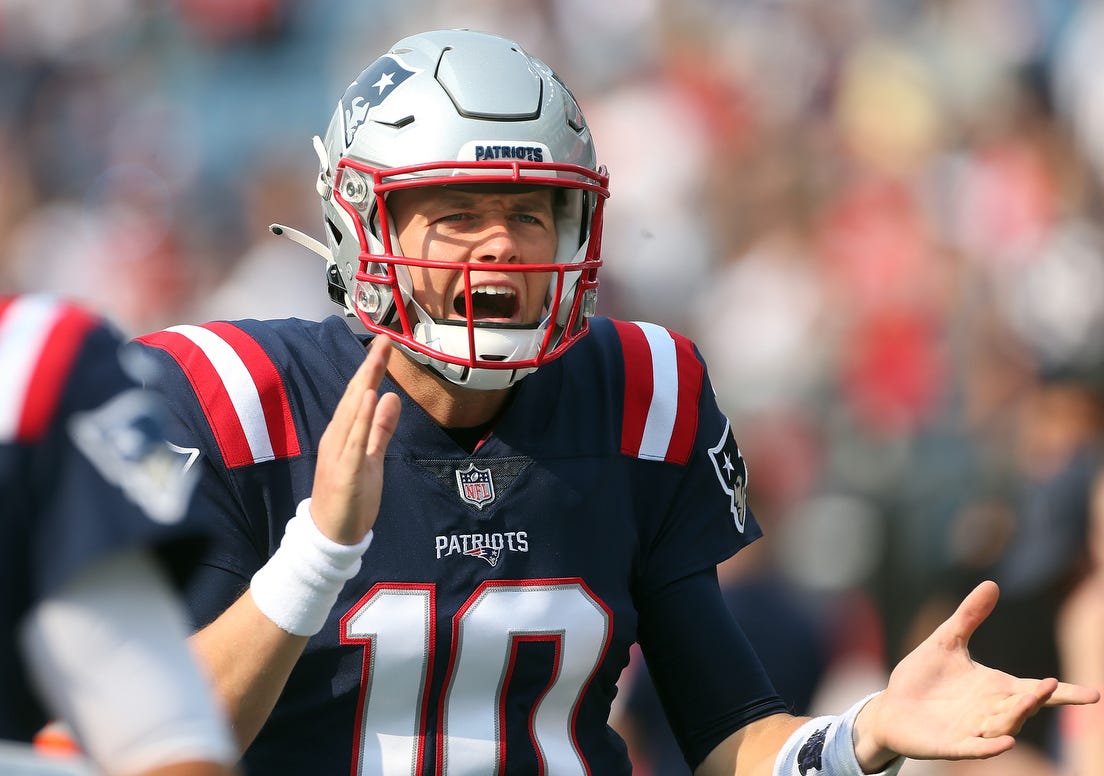 It was a record-setting week for underdogs in the NFL going 12-4 ATS, marking the most wins against the number in any Week 1 during the Super Bowl era. But as we turn the page to Week 2, the keyword is reaction. Which performances are worth taking stock in and which ones should be dismissed? It’s a difficult question to answer for bettors and bookmakers alike.

Before we get to this week’s selections, a brief update on the Offensive Rookie of the Year market. PointsBet took an aggressive approach in repricing Mac Jones this week, moving his odds down to +300, shorter than FanDuel (+350), MGM (+350) and Draftkings (+400).

“We think he is the clear-cut favorite now,” said Croucher. “Just because of how bad Lawrence and Wilson looked. The Niners are going to be solid with Jimmy G and I think it’s going to be hard for Trey Lance to unseat him early. Potentially the biggest threat to Mac Jones is how bad Andy Dalton looked.”

Bill Belichick has terrorized rookie quarterbacks to the tune of a 21-6 record since 2000 (sure, most of those were with Tom Brady under center) and while Mac Jones might not be Brady, he graded out as the best rookie QB in Week 1. New England outgained Miami last week and should have won the game, now they get to reload against a mangled Jets offensive line that will be without Mekhi Becton. That means George Fant is forced to switch from right tackle to left, which he compared to a pitcher trying to pitch with his other hand.

The spread also shows a lot of respect towards New England. “Even though it’s the Jets, the Pats are still 5.5-point favorites on the road. That implies they’re around 8 points better on a neutral field, that’s a lot,” said Croucher. It might be a lot, but I just don’t see the Jets being able to protect Zach Wilson and generate enough sustained offense to keep this within the number.

The movement here is enticing as the slight majority of action is coming in on the 49ers but the line has inched slightly in the Eagles’ favor, from +4 to +3.5 or shorter. Jalen Hurts was a big surprise in Week 1, posting the lowest negatively graded throw-rate of any quarterback, which was a category he struggled in last season. Meanwhile the 49ers are already fighting the injury bug, losing their best cover corner and top running back last week. Raheem Mostert will be missed, but the absence of CB Jason Verrett is a huge concern both long-term and in this game if Hurts executes the passing offense as precisely as he did against the Falcons. There should be a lot of buzz at the Linc for this home opener after last week’s emphatic victory.

We bet this one earlier in the week before news surfaced about six members of the Saints offensive coaching staff testing positive for COVID. That of course gives us cause for concern, but the Panthers offensive line graded out as the second-worst unit in Week 1 and I expect the New Orleans defense to rule the day here. As long as Jameis Winston can avoid the big mistake, the Saints should be able to control tempo and generate pressure on Sam Darnold with their base front, just like they did against Aaron Rodgers last week.

This total has moved by a significant margin since we grabbed it earlier in the week and I might wait until Sunday just to see if it doesn’t creep back down a bit. The move higher was likely sparked by some intense sharp action coupled with the news about Randy Gregory and DeMarcus Lawrence both sitting this one out for Dallas. That’s great news for Justin Herbert, who already has the luxury of playing behind an offensive line that allowed the lowest pressure rate (12%) last week against a good Washington front. If the Chargers jump out to an early lead as expected, the game script should mirror what we saw in Tampa last Thursday night, when Dak Prescott looked comfortable pushing the tempo with 58 passing attempts.

Aaron Rodgers owns the Lions. The reigning MVP has a 17-5 career record against Detroit and has posted a passer rating of 100-plus in 14 of those games. “This is the perfect tonic for the Packers,” said Croucher. The Lions showed spunk in Sunday’s frantic comeback, picking up an unexpected backdoor cover against the 49ers (for those who got SF at -8.5 instead of the earlier -7.5). Jared Goff presented himself as a serviceable NFL quarterback behind a Detroit offensive line that graded out as the 11th-best unit of the week. I’m expecting some positive regression from the Green Bay defense after getting blasted by the Saints, but I also expect the Packers offense to do most of the heavy lifting in hitting this total.

The Jaguars’ pass blocking graded out among the worst units last week and now have to face a ferocious Broncos front that should get back Bradley Chubb. On offense, Teddy Bridgewater is an insane 35-13 ATS as a starter and 4-1 ATS as a road favorite but we don’t need Teddy to cover this number, just win the game.

I was going back and forth on the Browns and Bengals for the 2nd leg of this teaser but ultimately decided on Cincinnati for one simple reason, Andy Dalton. I know it’s a revenge spot for the Red Rifle, but he’s 0-4 ATS as a favorite since 2018 and I just don’t see Chicago winning this one comfortably, if they win it at all. Also, the Bears offensive line graded out as the third-worst unit last week and now has to face a Cincinnati front that held Dalvin Cook to 61 yards.

Don’t forget to find out this week’s hottest trends — the five best betting trends for Week 2!