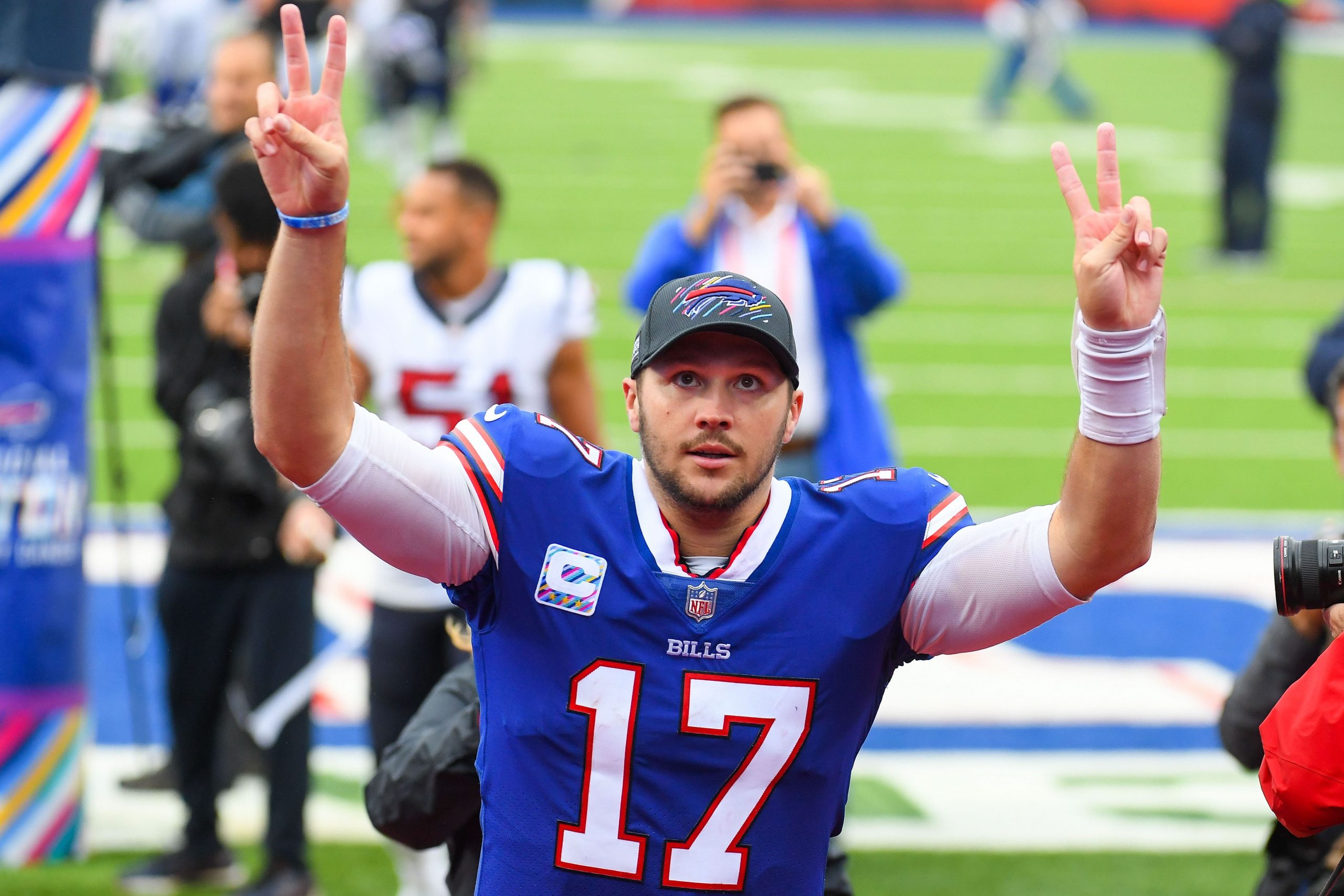 As the calendar turns to October and the sample size becomes deeper, the words of legendary coach Bill Parcells begin to carry more weight: “You are what your record says you are.”

By that logic, the Cardinals are the best team in the NFL, because they are the last of the unbeaten. But to quote another great coach, Lee Corso: “Not so fast, my friend.” Arizona’s numbers are very good, and Kyler Murray looks like an MVP, but so does Josh Allen, and it’s Buffalo’s defense that has me very excited about this Sunday night’s primetime matchup at Arrowhead.

More on that game in a bit, but first, let’s go back to the Cardinals for a moment. In Week 1, many brushed off their dominating win over the Titans as a fluke, but now, three weeks later, oddsmakers are starting to truly believe. “Now we’re getting to the point where we have to treat the Cardinals as real,” said PointsBet Head of Trading Jay Croucher. “What the Cardinals did to the Rams, they’re a pretty frightening team.”

I’m staying away from laying nearly a touchdown with Arizona this week at home against the 49ers for fear of chasing the steam, but if Trey Lance plays like the rest of his rookie quarterback brethren have so far this season, it’s a good bet the Cardinals finish the week 5-0.

Bet on Monday at Unibet. Would play to +3

Zach Wilson showed flashes of his ceiling on Sunday and will have a similarly soft secondary to feast on this Sunday. The Calvin Ridley news will likely move this market, and Russell Gage will also miss the game for Atlanta, so I would not be surprised at all if the Jets closed at +2.5. Also, if the total drops back down to the lookahead number of 44, it is definitely worth a play on the over. Even without Ridley and Gage, Atlanta still has enough depth with Cordarrelle Patterson and Kyle Pitts to stretch the field better than the Titans did against the Jets last week without AJ Brown and Julio Jones. I can see the pace of this game resembling what we saw between Atlanta and Washington on Sunday, which was frantic.

The side was an easy choice for me as it’s really hard to justify laying points with Atlanta in this spot, and the Jets are starting to show oddsmakers a glimmer of upside. “The Jets are not the car crash that some thought they might be,” said Croucher. “I think they might trend to being just a respectable bad team.” Since this game is being played in London, the weather is most certainly a factor. At the time of publication, all looks clear at Tottenham Hotspur Stadium, but obviously, things could change by Sunday morning.

I’ll admit I don’t love getting the worst of this line, which opened at +8.5, but the smart money is screaming at me with some of the most obvious reverse line movement of the season thus far. Everyone is hopping on the Cowboys bandwagon after Sunday’s impressive win over the Panthers, and rightfully so, but this line continues to show downward pressure towards the Giants and I would not be surprised if it closed at +6.5.

It’s difficult to make a logical case for the Giants to win this game considering how good the Cowboys looked last week, but I will certainly try. New York is slightly ahead of Dallas in Net Yards Per Play, mainly because the Dallas defense has bled yards this season. Also, Daniel Jones has played better than expected. Jones has a higher adjusted QBR than Dak Prescott, Aaron Rodgers, Joe Burrow, and Josh Allen this season. The sharps are also raising red flags and have consistently faded the Cowboys since Week 1. “The past few weeks the line has moved against Dallas, so there is some reticence among sharp bettors of the Cowboys,” said Croucher. I liked what I saw from Saquon Barkley and rookie Kadarius Toney last week and I think Jones will do enough to keep this close.

Bet on Monday at MGM, playable to -2

I’ve seen this line touch -2.5 at some spots, so I feel good about the early market movement in my direction. I think the smart money is favoring New Orleans because of its defense, which is genuinely one of the best units in the NFL. The Saints are 2nd in overall DVOA and are allowing the 5th-fewest points per game (17.3) despite allowing 5.5 yards per play, showing a true bend-but-don’t-break-mentality. On the other side, Washington’s defense has really struggled this season, which is puzzling considering their talent. The Football Team is ranked 28th overall in DVOA and allowing just over 30 points per game, 3rd-most in the league.

I don’t want to dwell too much on the Saints’ blown lead against the Giants on Sunday. They dominated for most of the game and, as previously stated, Daniel Jones is playing at a pretty high level. Also, the NFL’s rules prevented New Orleans from touching the ball in overtime. The Saints have a bye next week, and I’m expecting this veteran squad to head into their mini-break with some positive momentum. “This is a spot where if New Orleans loses this to Washington, I don’t think they’re doing anything this year,” said Croucher.

I’m worried about the Packers’ defense. Top corner Jaire Alexander is down due to a shoulder injury, then on Wednesday edge rusher Chauncey Rivers suffered a non-contact knee injury in practice and is being placed on IR. The team did sign Jaylon Smith this week, but I can’t see him having any significant impact in his first few days on the roster. All of that is good news for an explosive Bengals offense that has had 10 days off to rest and contemplate their near-death experience against the Jaguars.

Sure, fading Aaron Rodgers is always scary, but I’ve got a better and healthier defense, catching points at home on long rest. Oddsmakers are also starting to see some upside with Cincinnati this season. “They should be able to put up a lot of points against this Green Bay defense, and if they don’t that probably says some bad things going forward for the Bengals,” said Croucher.

Bet on Monday at DraftKings. Would play to +2.5

We saved the best game for last. I know Kansas City scored 42 points last week and reminded us all of just how good their offense can be, but I truly believe the wrong team is favored in this game. In my personal power rankings, Buffalo is the top dog in the NFL after the first four weeks, and this line denotes that Kansas City is about 1.5 points better than the Bills on a neutral field, which does not seem accurate.

Since losing to the Steelers in Week 1, Buffalo is 3-0 and is outsourcing opponents 118-21 with two shutouts. They also lead the NFL in Net Yards Per Play and Net Points Per Play. Meanwhile, the Chiefs are dead last in defensive DVOA and are allowing 6.9 yards per play this season. Woof. The only way I see Kansas City stopping Josh Allen this week is if he stops himself. Throw in the revenge narrative and I would not be surprised at all if the Bills leave Arrowhead with a win on Sunday night.

Line available at DraftKings at time of posting

I won’t rehash my handicap on the Bills game, and will instead lean into a Ravens team that has won three in a row and is finding its stride after a dominating win last Sunday in Denver. I don’t expect Colts running back Jonathan Taylor to have the same success running the ball this week as he did last week against the porous Dolphins defense. Baltimore is also finally getting healthy. Rookie first-round wide receiver Rashod Bateman may make his pro debut on Monday and fellow wideout Miles Boykin has returned to practice as well. I just can’t see Carson Wentz waltzing into town and leaving with a primetime win considering how good the Ravens are playing right now on both sides of the ball.

Line available at DraftKings at time of posting

The Lions are truly bad on defense, ranked 31st in total DVOA, so I expect bounceback games from all of the Minnesota skill position players this week, especially Dalvin Cook. The Browns completely shut down the Vikings rushing attack to just 65 yards on Sunday, as Cleveland lived up to its billing as the best rushing defense in the league according to DVOA. Detroit meanwhile is 30th against the run. On offense, Lions Pro Bowl center Frank Ragnow was placed on IR with a toe injury, which means things aren’t getting any easier for Jared Goff.

The Patriots continue to excel on defense, and get another cupcake matchup this week against Davis Mills and the Texans, who were shut out by Buffalo last week. Matthew Judon is playing some of the best football of his career with 4.5 sacks through the first four games. I expect Mills and Judon to get closely acquainted on Sunday. Back in Week 2, I wrote about Bill Belichick’s success against rookie quarterbacks when New England beat the Jets 25-6, and I’m expecting a similar scoreline this week. As long as both of these lines stay at -8.5, they offer a lot of value in the teaser market.