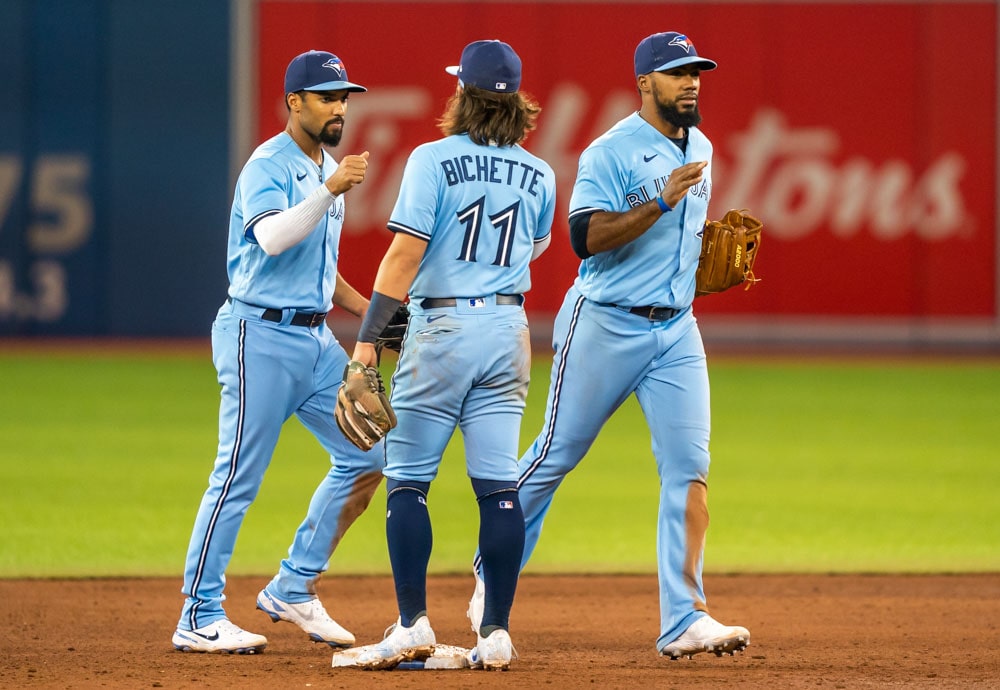 The 2022 MLB season continues this weekend, and we have another exciting slate of games on Saturday. One of the best matchups on the board features the Toronto Blue Jays and Los Angeles Angels starting at 9:38 pm ET.

What better way to celebrate this matchup than by betting a same game parlay? I just cashed this mega parlay at +943 odds yesterday. Let’s keep the momentum going!

We have come up with a 3-leg parlay, which would pay out at nearly 7/1 odds with FanDuel Sportsbook.

Toronto Blue Jays vs LA Angels: Start time and how to watch

The Blue Jays and Angels continue their series on Friday with a start time of 9:38 pm ET. The game is airing exclusively on Apple TV+. Let’s get into our same game parlay for this AL matchup.

To start off this same game parlay, the Toronto Blue Jays on the run line. The Blue Jays have found their mojo at the plate of late after a disappointing start to the campaign. More importantly for Toronto’s success is the stellar play of Alek Manoah, who takes the hill for the Blue Jays on Friday. Manoah has been one of the best pitchers in the AL this season, holding a 1.60 ERA and a .880 WHIP through 8 starts, while averaging nearly 7 innings per start in the process. On the other side, the Angels have cooled down a bit after their hot start and the Halos will counter with Chase Silseth. The rookie starter doesn’t have much experience at the MLB level, especially against a lineup of this caliber.

It wouldn’t be surprising if Vlad Jr., Bo Bichette and co. pick up a few early runs against Silseth and win this game comfortably behind another dominant effort from Manoah.

Long touted as one of the brightest young infielders in baseball, the 2022 season didn’t get off to an ideal start for Bo Bichette. However, the shortstop has raised in level in recent weeks, picking up 12 hits in his last 10 games, while driving in 9 runs in the process. Bichette still needs to cut down on the strikeouts, but his batting average is rising, as is his OPS and slugging. The infielder is starting to look like the career .300 hitter we’ve been accustomed to seeing, and I expect his success to continue against Silseth. Bichette drove in 2 runs in the series opener and should see at least one at-bat with runners on base. As long as his teammates can set the table, Bichette should be in good position to add another RBI to his recent tally.

As a rule, including legs that may not correlate with each other always increases your odds in a same game parlay. However, I don’t think Taylor Ward having success conflicts with a Blue Jays victory. Ward has been one of the primary reasons why the Angels offense has had a resurgence in 2022. Hitting .367 with 40 hits in 109 at-bats, Ward has been the model of consistency and there’s no reason to expect that to slow down on Friday. The outfielder should get at least 4 plate appearances, so even if he doesn’t succeed against Manoah, Ward should have a few chances to get a hit against the Toronto bullpen.