Odds are gradually becoming available for betting on the national anthem at Super Bowl LV from all of the major American sportsbooks. The singers of the American national anthem were revealed to be Jazmine Sullivan and Eric Church on Tuesday, January 19.

It is also reported that Jazmine Sullivan and Eric Church have never actually sung together, and perform different styles of music. Sullivan is an R&B artist, while Church is a country singer.

Although some oddsmakers are still compiling odds for the national anthem, all major sportsbooks will carry them and that includes DraftKings, FanDuel Sportsbook, BetMGM, William Hill, BetAmerica, and Unibet. The most popular betting market is usually the length of the national anthem, but others available include whether a word will be omitted.

The most popular prop bet around the Super Bowl national anthem is the length of it. Bettors are normally given a specific length of time, such as 1 minute and 53 seconds, and you can then bet on whether you think the anthem will be longer or shorter than that time. This is referred to as an over/under, or totals wager.

The biggest trend to point out is that the under has won in each of the past five years, with the length of performances also getting quicker and quicker. In the Super Bowl’s most recent national anthem, Demi Lovato clocked a time of 1 minute and 49 seconds, while Gladys Knight, who performed at Super Bowl LIII, came in at 2 minutes and 1 second. Meanwhile Alicia Keys took 2 minutes and 35 seconds to complete the anthem in 2013 — 46 seconds longer than Lovato!

It’s worth noting that this will be the first time that the national anthem has been sung by a duet since Super Bowl 40 — 15 years ago — when Aretha Franklin and Aaron Neville took to the stage. On that occasion, the national anthem lasted for 2 minutes and 8 seconds.

Below is a list of the past 10 Super Bowl national anthem singers, the length of their performance, and whether it was over or under the designated time: 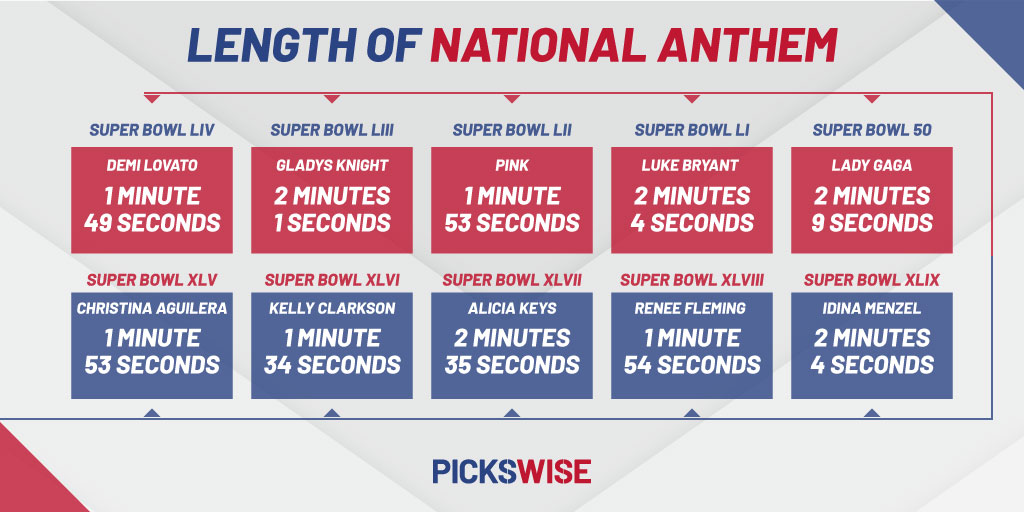 The line for the Super Bowl national anthem has been set at 2 minutes and half a second. That means that you can either bet on it to be two minutes or shorter, or you can bet on it to be 2 minutes 1 second or longer.

I think taking the under makes the most sense in this spot. Despite Aretha Franklin and Aaron Neville’s rendition of the national anthem lasting 2 minutes 8 seconds, duets tend to be faster-paced, and the fact that Sullivan and Church have never performed together suggests that they will likely play it straight. Sullivan is primarily an R&B singer while Church is a country performer, and the combination of those two styles will likely result in a national anthem with a decent tempo.

Further, the last three national anthems have all been 121 seconds or shorter. On the occasion that it went for 2 minutes and 1 second, Gladys Knight included a couple of pauses and held a number of notes during her performance, and it is hard to see Sullivan and Church adopting a style that would last quite as long. Sullivan performed the national anthem at a Philadelphia 76ers game in 1 minute and 45 seconds, and at the NHL’s All-Star game she did it in 1 minute and 37 seconds. There is no reason to think she will clock a significantly longer time for Super Bowl LV. Back the under.