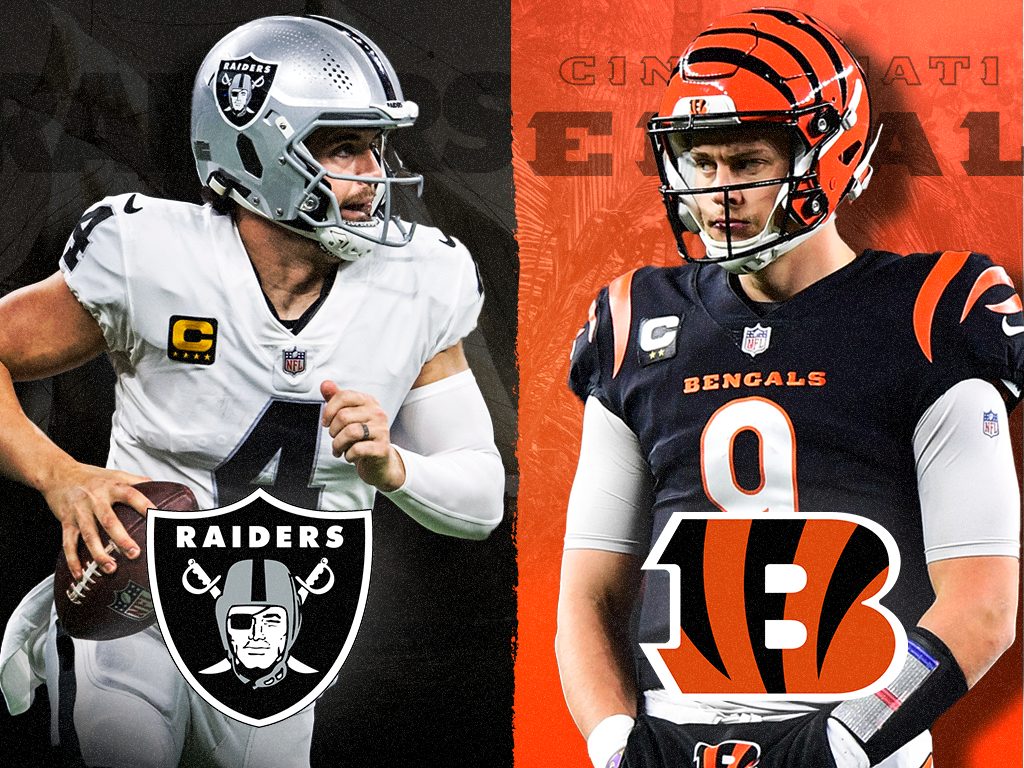 It’s NFL playoffs season, baby! And we’ve got a great game to kick off Wild-Card Weekend — arguably the greatest weekend of the year — when the Las Vegas Raiders take on the Cincinnati Bengals. The Raiders managed to reach the playoffs in insane circumstances when they kicked a field goal at the end of overtime on Sunday night to eliminate the Los Angeles Chargers. The Bengals overcame a 14-point deficit to defeat the Chiefs 2 weeks ago and win the AFC North. Both teams will be high on confidence and that should lead to a great game of win-or-go-home football.

To make the buzz for this matchup even greater, I’ve put together a 4-leg same game parlay which pays at +1336 odds with FanDuel Sportsbook. I cashed a +825 same game parlay last week in the Washington vs Giants matchup, so I’m feeling it right now when it comes to these bets.

The good thing about same game parlays is that you can use some contradictory legs to get a good odds boost. That’s what I’m going with here, by combining the over on Zay Jones’ receiving yards with a couple of Bengals plays, when ultimately I don’t expect them to conflict too much. Let’s break ’em down.

There’s been a lot of money coming in for the Raiders in this game. Vegas opened as a 6.5-point underdog, and at the time of writing that has been bet all the way down to 4.5. The public love the Raiders. Sadly for them, I do not. Granted, they’ve won 4 in a row, but each of those came by 4 or fewer points and I still don’t buy them as a playoff team. They showed how flimsy they can be on defense last week when they let Justin Herbert complete 4th down after 4th down, and nearly missed the playoffs as a result. They made the fewest interceptions in the league with just 6, and are tied for allowing the 9th-most passing TDs this season.

All of that doesn’t bode well for them given the Bengals have been on fire on offense, with Joe Burrow posting 971 passing yards and 9 touchdowns in his last 2 games. Ja’Marr Chase, Tee Higgins and Tyler Boyd have been lighting it up out wide and Joe Mixon has been getting it done on the ground. I just don’t see how the Raiders will stop them. Further, the Bengals actually beat the Raiders 32-13 less than 2 months ago, and it’s hard to see why things should be drastically different this time. Take Cincinnati to get its first playoff win since 1990 to start off this SGP.

This might seem like a bit of a random pick, but hear me out. First off, Bengals tight end CJ Uzomah has topped this line in each of his last 2 games, and in 3 of his last 4. He’s also had at least 4 receptions in 3 of his last 4 games, and has clocked 5 touchdowns over the season. Admittedly he hasn’t found the end zone in any of his last 9 games, but this matchup is the perfect opportunity.

For starters, the Raiders are already going to have their hands full with Chase, Higgins and Boyd that I’m expecting Uzomah to see a lot of targets. Secondly, the Raiders gave up 10 touchdowns to tight ends this season, which was the 3rd-most in the league, and 1,018 total yards. Jared Cook tore ’em a new one last week, and the last 7 tight ends they’ve faced have all gone over this number. That’s good enough for me.

I’m old enough to remember that some books last season set Zay Jones’ receiving yards line at 0.5 — the disrespect! But he’s come a long way since then and even though I’m predicting a Bengals victory, I like Jones to have another good game. In the second half of the season he’s been a favored option for Derek Carr, with Jones being targeted at least 7 times in each of the last 5 games, and he’s had at least 5 receptions in that period. He’s topped this line in 3 of those matchups, and that includes having 8 receptions for 120 yards against the Colts 2 weeks ago. The Bengals given up the 7th-most yards through the air this season and allow the 7th-highest completion percentage. I’m expecting another strong showing from Jones.

Make sure you read PropBetGuy’s best player prop for Raiders vs Bengals!