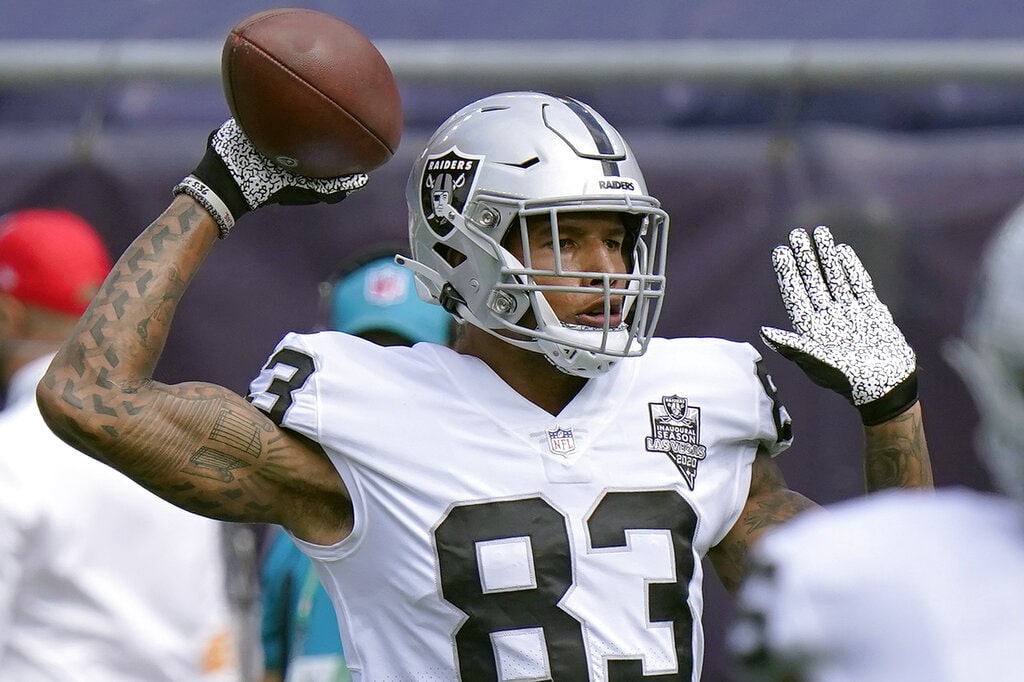 The playoffs get underway on Saturday afternoon with an outside contender for the game of the first round as the Las Vegas Raiders travel to the Cincinnati Bengals in the AFC. Trips to the playoffs have been rarities for both franchises in recent years with the Bengals gearing up for their first postseason run in six years after winning the AFC North with a 10-7 record.

For the Raiders, this is only their second playoff appearance in the last 19 years. Vegas rallied late in the season and won their final four games to snatch a wild card spot as they went 10-7.

So, the stage is set for an intriguing playoff matchup and now is the time to take a look at who might be the hero for these franchises as we examine the best touchdown scorer bets for Saturday’s game.

Had Darren Waller not just made his return from a lengthy injury layoff, you would be very unlikely to get this sort of value on the Raiders’ offensive star and it’s worth snapping him up to score the game’s first TD at these odds. Waller had been absent since Thanksgiving before making his long-awaited comeback in the Week 18 showdown with the LA Chargers. It was a low-key return as he finished the game with 2 catches for 22 yards.

Waller looked rusty but it was clear Derek Carr was keen to get him involved, targeting him nine times in the game, including twice when down in the red zone. Surprisingly, given his importance to Vegas, Waller only has 2 touchdowns to his name this season having grabbed 9 in 2020 but it hasn’t been for want of trying with only Hunter Renfrow receiving more red zone targets.

I like to think that after another week of practice there’s an opportunity for Waller to make a splash play on the big stage against a Bengals team that could come out a little cold on the big occasion. This is a nice matchup for Waller against a Cincinnati team that struggled to defend tight ends all year, giving up eight touchdowns to the position this season. The Bengals had a nightmare trying to contain Waller when the teams met in Week 11 of the regular season, giving up 116 yards but somehow managing to keep him out of the endzone.

The Bengals have also given up the opening touchdown in six straight games, while in comparison, the Raiders have scored the first TD in four in a row, adding even more weight to Waller being a nice value selection.

Read our same game parlay for Raiders vs Bengals (+1336 odds!)

Joe Mixon did most of the damage when the Raiders hosted the Bengals in Week 11 but there’s no value to be found in his price to add to the two touchdowns he got in Vegas. Instead, we turn to the man that also proved a handful for the Raiders’ defense, exposing them in the middle of the field, where their defense is soft. Tyler Boyd finished up that game with six receptions, the most of any Bengals receiver, and yet is the outsider when it comes to the anytime TD odds for Cincinnati’s three-headed receiving monster.

Boyd is not as flash as Ja’Marr Chase or Tee Higgins, but he enjoyed a strong end to the regular season, scoring 3 touchdowns in his final 3 games before being rested for the Week 18 game against Cleveland. Boyd has had to work hard to carve out a role for himself in the Bengals offense but has proven himself a dependable option and, much like Waller, this is a matchup that should play to his strengths.

Find out PropBetGuy’s best player prop for Raiders vs Bengals!