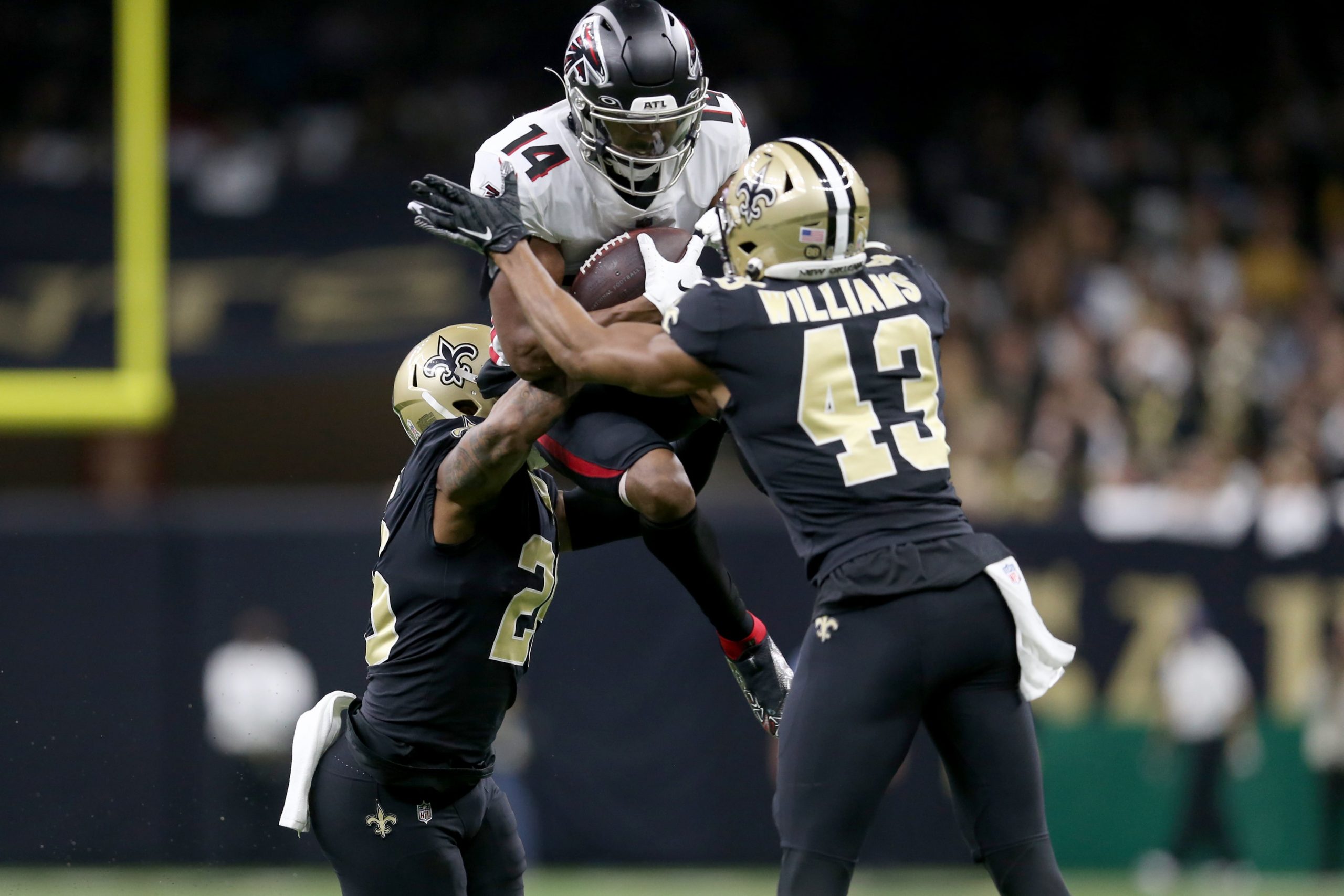 We’ve got a rematch of Super Bowl LI on Thursday Night Football this week as the New England Patriots take on the Atlanta Falcons. Atlanta will not only be looking for revenge after squandering a 28-3 lead to lose in that Super Bowl, but Arthur Smith’s team will also want to bounce back from last week’s humiliating 43-3 loss to the Cowboys. As for the Patriots, Bill Belichick’s men are riding a 4-game winning streak that has pushed them to a 6-4 record and just one win behind the Bills in the race for the AFC East.

There’s plenty on the line in this Week 11 matchup, and to add to the drama we’ve got a same game parlay that’s available at huge +3419 odds with FanDuel Sportsbook!

Makes sure you check out our picks on the side and total for EVERY NFL Week 11 matchup.

Russell Gage to score a touchdown (+380)

The benefit of same game parlays is that you can combine plays that on paper appear slightly contradictory to boost the odds, when there isn’t actually too much crossover. That’s what we’re going for here. By taking Gage to score a touchdown for the Falcons while also betting the Patriots against the spread with the under on points, we get a serious bump in the odds. Overall though, I think each leg has a good chance of hitting. Let’s break it all down.

The Patriots looked very shaky at the start of the season as they registered just 2 wins in their first 6 games, but things have been very different after they annihilated the Jets 54-13. They have since beaten the Chargers, Panthers and Browns, with their run game in particular being the secret ingredient behind their success. Rookie running back Rhamondre Stevenson went for 100 yards and 2 touchdowns against the Browns and New England now has 10 rushing scores in their last 5 games, with Damien Harris also being a force to be reckoned with out of the Patriots backfield. The Falcons defense hasn’t been horrific in containing the run, but it has allowed the 7th-most rushing touchdowns.

The Falcons have been up and down this season and have a 4-5 record to show for their efforts, but it’s worth noting that 3 of those victories came against teams that currently have 3 or fewer wins, and the other was against a Saints team starting Trevor Siemian. Outside of Kyle Pitts and Cordarelle Patterson (who picked up an ankle injury against Dallas), the Falcons are lacking severely on offense and it’s hard to see how they can keep things competitive against a Patriots defense that has allowed the second-fewest points in the NFL.

A lot of what I said above is also why the under is the way to go in this one. New England has kept 3 of its last 4 opponents to 13 or fewer points and has allowed just 5 rushing touchdowns in 10 games this season. The Pats have also allowed the 7th-fewest passing yards per attempt, which is bad news for Matt Ryan as he looks to bounce back from his horror show against the Cowboys last Sunday. Cordarelle Patterson and Kyle Pitts have been the only bright sparks for the Falcons and Bill Belichick is expected to have both of them accounted for on Thursday night.

Although the Patriots’ offense put 45 points on the Browns I am still not convinced by Mac Jones and if the Patriots continue to lean on their run game, then that should keep the clock running and limit possessions for both teams.

Russell Gage to score a touchdown (+380)

Adding Russell Gage to score a touchdown really cranks up these odds, and it’s a shot worth taking. Patterson and Pitts should be well scouted but Gage does come into things as a bit of a wild card. He failed to register a catch against the Cowboys but I’m happy to almost disregard that game as the entire Falcons offense was horrific. Prior to that game he saw the most snaps of any receiver against the Saints and had 64 receiving yards from 7 receptions to show for it. Against the Dolphins, he had 67 yards and a touchdown.

The Patriots have been superb against the run, so if the Falcons are going to score it will likely have to be through the air. At almost 4/1, it’s well worth adding Gage to this SGP and shooting for the 34/1 payout in what could still easily be a low-scoring game dominated by the Pats.