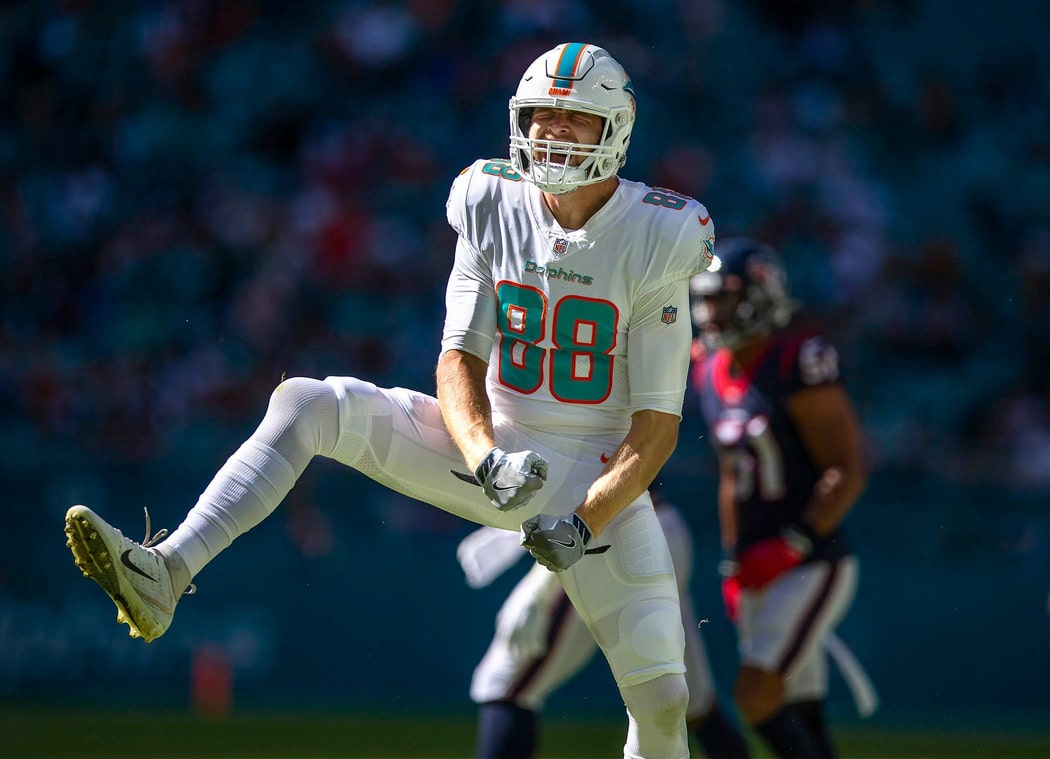 The second half of the 2021 NFL season gets underway on Thursday Night Football as the Miami Dolphins host the Baltimore Ravens in this all-AFC showdown. The Dolphins won for the first time since Week 1 last Sunday with a 17-9 victory over the Texans, while the Ravens needed overtime in order to get past the Vikings. Baltimore sits at the top of the AFC North with a 6-2 record, but given how competitive that division is this year, the Ravens will know that they need to keep winning if they want to stay there.

This should be an intriguing matchup, and one way to make it even more exciting is by betting a same game parlay, with this particular SGP posing odds of +1666 with FanDuel Sportsbook! I’ve cashed a number of TNF same game parlays so far this season, so let’s add another to the collection!

Mike Gesicki to score a touchdown (+230)

The benefit of same game parlays is that you can combine plays that on paper appear slightly contradictory to boost the odds, when there isn’t actually too much crossover. That’s what we’re going for here. My plays in this SGP is very Dolphins-heavy, but by betting Gaskin to have a poor running game while Miami also covers works well in increasing the odds, when I think both have a strong chance of happening. Let me explain.

On paper, the Ravens should blow the Dolphins out of the water. However, I believe Miami can keep this one within a touchdown. Things haven’t gone right for the Fins this season, and last-second field-goal defeats to the Jaguars and Falcons highlight that. However, they did recently manage to push the Bills for a long time before Buffalo finally pulled away in the fourth quarter, and the win over the Texans should restore some confidence in Brian Flores’ team.

Baltimore fought back to beat Minnesota in overtime last week in a game they were fortunate to win, and prior to that they got annihilated by the Bengals. The Ravens have struggled at times to beat teams they had been expected to dominate, such as the Lions and Colts, and I think it’s asking a lot of Lamar Jackson and company to win comfortably on the road on a short week. Back the Dolphins ATS to kickstart this SGP.

Mike Gesicki to score a touchdown (+230)

The Ravens have given up the third-most receiving yards to tight ends in the NFL, which is huge considering they have already had their bye week. Now they have to defend against the in-f0rm Mike Gesicki, who has had 54 receiving yards or more in 5 games this year, and has been getting plenty of looks from his quarterback, having been targeted at least 7 times in 4 of his last 5 games.

The Dolphins have a solid tight end corps with Durham Smythe and Adam Shaheen also options, but Gesicki remains their most viable option and he should be able to cut up the Ravens down the middle of the field. He has only found the endzone twice this season, but I like his chances of doing it here. At +230 odds, it’s worth adding that to the SGP as well as the over on receiving yards.

As much as I like the Dolphins’ chances of covering, I don’t expect it to be because of Gaskin. Last week Gaskin went up against a pitiful Texans run defense and managed just 34 yards on 20 carries. In the week prior to that, he had 36 yards from 12 attempts. The Washington product has struggled this season, topping this line just 3 times, and Flores hasn’t been afraid of giving carries to his other running back Salvon Ahmed.

The Ravens’ run defense found things difficult against Dalvin Cook last week, but prior to that they had kept Jonathan Taylor, Joe Mixon, and Austin Ekeler all under 60 yards. I know this line is 42, but Gaskin isn’t anywhere near the quality of those previous three and I’m predicting another frustrating day for the running back. There is also the chance that Miami has to air it out more if Baltimore takes a solid lead, which also reduces Gaskin’s chances of going over this number. Take the under and that will hopefully help us cash this 16/1 SGP.

Find out our best touchdown scorer bets for TNF, including a +900 1st TD scorer pick!