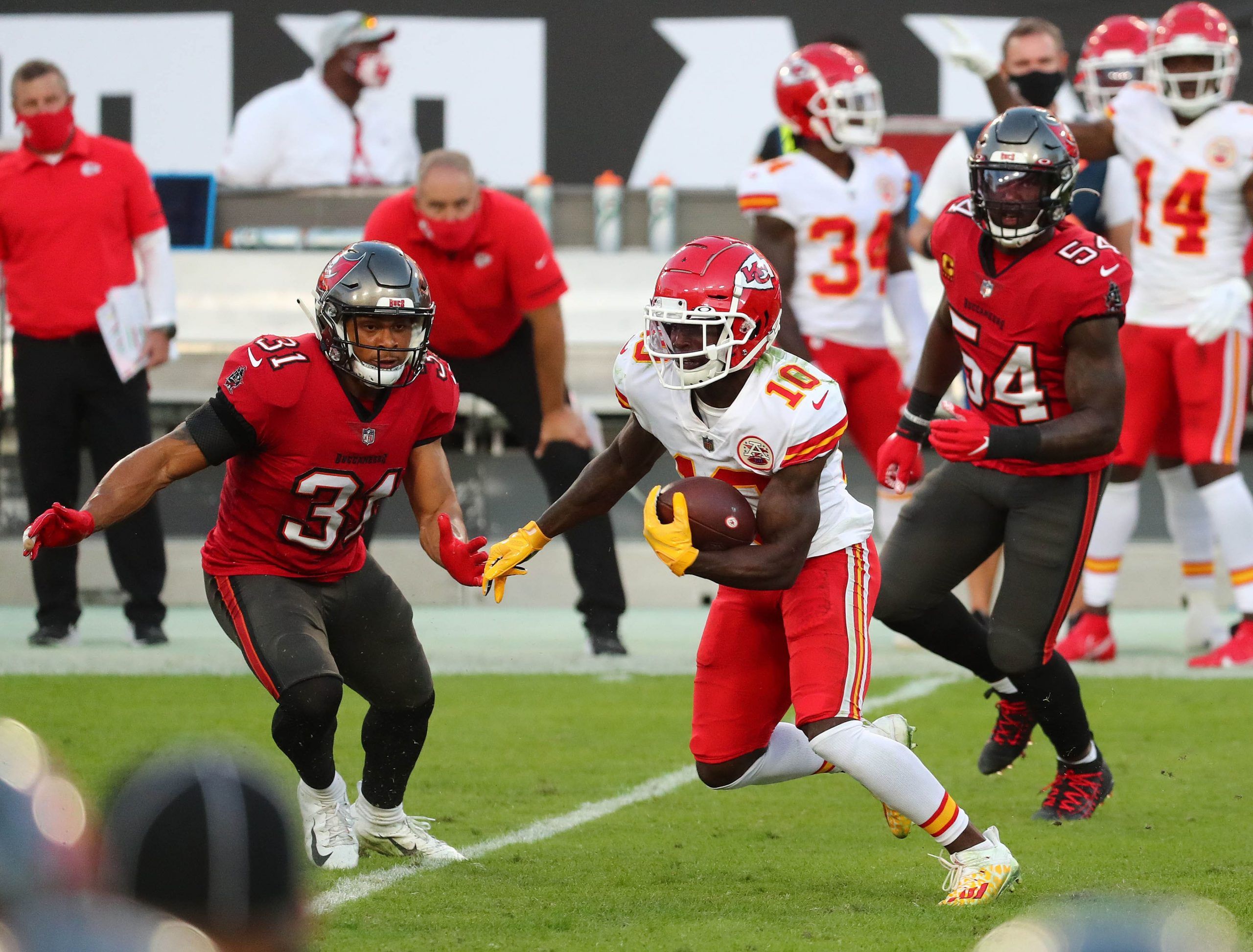 I'm an NFL handicapper here at Pickswise who was raised in a household full of sports fanatics. Since I unfortunately never had LeBron James' jumping ability I wasn't able to make it to the NBA, and chose writing about sports as the next best thing. An avid sports bettor myself, I'm excited to get to write about the industry as it gets set to take off across the country. Buckle up.
Updated: 7:10 AM ET February 02, 2022

Kansas City Chiefs vs. Tampa Bay Buccaneers predictions, picks, odds, spread, lines and betting odds. We finally made it to the end of the NFL season. It’s bittersweet, but at least we’ve got a great Super Bowl to look forward to. It’s a battle of generations as Tom Brady faces off against Patrick Mahomes in the playoffs for the second time.

Brady won that first matchup, in the AFC Championship Game two years ago, now can Mahomes get his revenge and win back to back Super Bowls at the same time? The Chiefs looked dominant in their win over Buffalo in the AFC title game, while Brady and the Bucs went on the road to Lambeau Field and knocked off the Packers.

Which team will be hosting the Lombardi Trophy when it’s all said and done? Let’s break it down.

Make sure you check out the rest of our Super Bowl LV trends, which give valuable nuggets of information for both teams in the big game, including why Kansas City’s ailing ATS record could come back to haunt them.

Well, we made it to the end of the season. It’s sad to see the NFL winding down, but we’ve still got one great game left as the Kansas City Chiefs and Tampa Bay Buccaneers square off in the Super Bowl. Patrick Mahomes will get his chance at revenge on Tom Brady after falling to him in the AFC Championship Game two seasons ago. Oddsmakers have the Chiefs as a three-point favorite, which feels a bit light to me for several reasons.

One factor to keep in mind here is that the game is being played in the Buccaneers’ stadium, but I don’t think there will be any home-field advantage to speak of. There will be a limited amount of fans at the game, and many of those tickets are being given away by the league. It’s not as if there is going to be a huge contingent of loud Bucs fans, and if anything I wouldn’t be surprised if Chiefs fans end up out-numbering them.

The Chiefs are making it look way too easy out here!

Moving to the on-field matchup, I don’t see how the Chiefs don’t have success throwing the ball. Tampa’s young secondary is exploitable, and every time they’ve faced a quarterback who can push it downfield they’ve been exposed. They might’ve looked good against an aging Drew Brees with a torn labrum, but the week before that they made Taylor Heinicke look like a franchise quarterback. The Chiefs won by three points when these teams played in Tampa during the regular season, but the game wasn’t as close as that final score indicates.

Kansas City was up 17 in the fourth quarter before a couple of late Bucs touchdowns closed the margin. Remember, this is a Tampa Bay team that won all of one game against teams with winning records during the regular season, and their playoff run has been very flukey thus far. Brady was mostly horrible against Green Bay as he tossed three interceptions, and it took an extreme series of miscues by the Packers for them to win that game. Their luck finally runs out here.

The under also makes some sense here because everybody seems to be underrating this Chiefs defense. Kansas City defensive coordinator Steve Spagnuolo used the regular season to tinker with his schemes, and he’s been a wizard so far in the playoffs. He just completely shutdown Josh Allen and that vaunted Buffalo passing game, limiting Allen to just 6.0 yards per attempt, and that number actually got inflated a lot by garbage time.

Again, Brady hasn’t actually played well the past couple of weeks, his opponents just gifted him countless easy opportunities. Against the Saints, Tampa’s three touchdown drives went for a combined 63 yards because of the short fields they were given off turnovers. Playing the Chiefs now, they aren’t going to be so fortunate with the starting field position.

While I think the Chiefs’ offense will have opportunities for success, they aren’t going to cover this number by themselves. Tampa Bay’s pass-rush could potentially pose some problems, especially with Mahomes less mobile due to the turf toe he’s dealing with. Those problems will only be exacerbated by the absence of left tackle Eric Fisher, who tore his Achilles in the AFC Championship Game.

This Kansas City secondary is legit, and their pass-rush really came alive against Buffalo. The Buccaneers’ defensive front, with the recently healed Vita Vea, should wreak enough havoc to keep this one from going over a total in the mid-50s.