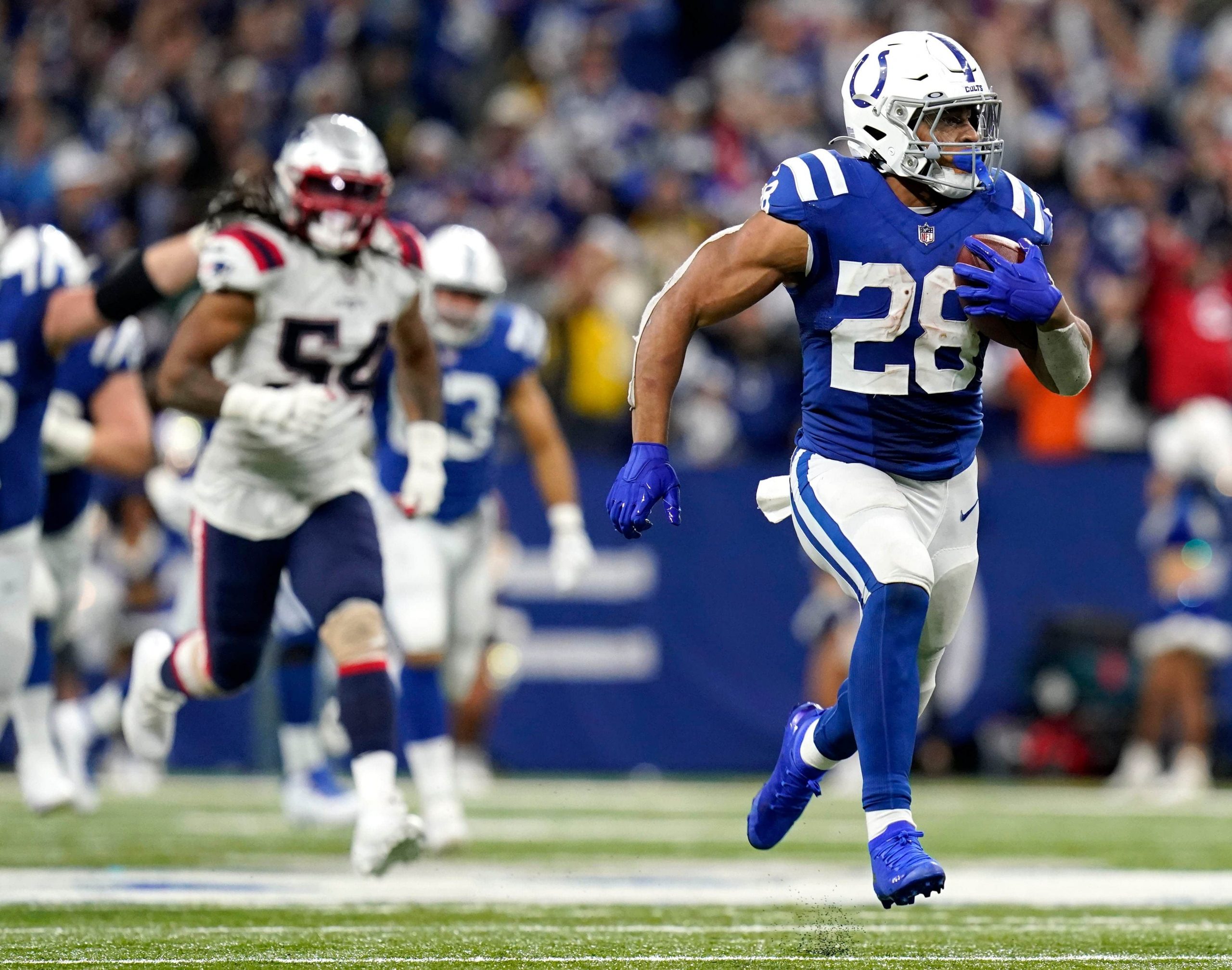 The top 4 of the Pickswise NFL Power Rankings didn’t stay the same unchanged for long — the Indianapolis Colts have burst into the elite group this week with a statement victory over the New England Patriots.

Let’s take a look at how the computer ranks all 32 teams heading into Week 16.

Just when everything looked to be going smoothly for the Chiefs again, Travis Kelce and Tyreek Hill have been added to the Covid reserve list, along with numerous teammates. The beneficiaries, who might not be getting the Chiefs’ best shot on Sunday, are the Pittsburgh Steelers.

The Packers didn’t do any favours for their spread backers on Sunday, letting a 14-point lead over Baltimore dwindle to just 1 in the last 5 minutes, but they hung on for the win that clinched the NFC North. The Packers are back in action on Christmas Day against the Browns but they still have plenty of challengers for the NFC No. 1 seed.

Read Jared Smith’s Back to the Futures article, analyzing the latest NFL odds

The Bucs didn’t really look like champions when scoring zero points against the Saints this week and they’ve picked up some potentially costly injuries to RB Leonard Fournette and WR Chris Godwin. Still, Panthers-Jets-Panthers is not the toughest finish to the regular season of any team in the league.

Here they are, the red-hot Colts, fresh from ending New England’s winning streak in pretty convincing fashion. They’re aiming to take down one of the NFC pacesetters next as they visit Arizona on Christmas Day.

Read our preview of Colts vs Cardinals

The Rams were the only team whose issues forced a game to be delayed in Week 15 to defy their problems and win, even though it took them a while to shake off the Seahawks. They don’t have the easiest finish in the league, though, with Vikings-Ravens-49ers to come, but there’s no room to ease up now they’ve drawn level with Arizona on 10 wins.

Check out our picks for Rams vs Vikings

The Patriots say in the top 6 after their loss to the Colts, but if you want to look at some negatives, they’re only 1 game ahead of Buffalo, who they face this week, and just 2 ahead of the Dolphins, who started the year 1-7!

The Bills are only 1 place behind in the rankings too! They won’t have Cole Beasley for their big game, though, as the wide receiver’s decision not to get vaccinated has come back to haunt him at a bad time and he is out for a mandatory 10 days.

The NFC East will be won by a team with a proper division winner’s record this year and it increasingly looks like it will be the Cowboys, who hopefully will provide some luxury sideline benches for Washington to sit on this week after taking their own seating to Fedex Field recently.

We have a jump of 4 places here for the 49ers, who look dangerous on offense again with Deebo Samuel back and their players also get to enjoy Christmas more than most around the league as they play the Titans on Thursday night.

It sounds silly but could there even be a QB controversy brewing in Baltimore? Lamar Jackson has not really lit it up this season and Tyler Huntley really doesn’t look much of a downgrade from the starter. The undrafted QB didn’t even get an invite to the combine but looks to have a bright future.

Is it too late for the Saints to make a run? A 7-7 record gets you on the point of elimination in the AFC this year, but it’s a more competitive spot in the NFC. A Dolphins-Panthers-Falcons finish gives the Saints a real shot.

We saw both sides of the inconsistent Titans this week. They looked a solid unit, and definitely better than Pittsburgh in the first half, only to turn to dust and hand the game to the Steelers late on. Thursday’s game against the 49ers is huge for them.

It was close but no cigar for the Chargers against the Chiefs, but they’re still right in there fighting in the AFC West as long as they don’t suffer too many losses to their current Covid outbreak.

Check out our Chargers vs Texans preview

Ah yes, Arizona. I owe you an apology. In last week’s Power Rankings, I wrote: “Cheer up, Cardinals. You’re playing the Lions this week!” Unfortunately, it seems too many of your players thought the same way…

Well, the Vikings got to 7-7, which is something after their shaky start but they still don’t convince as a playoff standard team. Getting Adam Thielen back this week would be a boost.

It’s 6 wins in a row for the Dolphins and into the top half of the rankings, but it’s a really long time since they played a strong team and New Orleans this week will at least give a better indication of how far they’ve really progressed.

The computer is being somewhat generous with this spot for the Seahawks, whose brief revival ground to a halt against the Rams. They’ve got some nice pieces but there’s no way it’s all coming together this year.

The Eagles fell behind to the shorthanded Football Team but got their act together to win. Can Jalen Hurts do enough to prevent the Eagles spending one of their first-round draft picks on a quarterback?

You had to (unless you’re a rival AFC North fan) feel for a Cleveland team missing 13 starters and starting a 3rd-string QB who looked to have pulled off a win over the Raiders on Monday, only to blow it again at the end. They do at least get head coach Kevin Stefanski back for their Christmas Day trip to Green Bay. They don’t want a lot for Christmas… just a road win at Lambeau Field.

I’m not sure why an 8-6 team (the current 4th seed in the AFC) is down here, 3 places below the 5-9 Seahawks. Let’s just say I hope a certain so-called smart friend of mine finds some new microchips under the tree on Saturday morning.

Maybe the computer just doesn’t enjoy AFC North football. Anyway, playing against Patrick Mahomes when he doesn’t have Hill or Kelce would be a massive stroke of luck for the Steelers if it happens.

It’s Drew Lock time for the Broncos, who now finish up with one game against each of their AFC West rivals.

The Raiders celebrated their last-kick win wildly as you might expect, but if they hadn’t seen off such a shorthanded Browns squad questions would have to have been asked.

The Football Team can’t be heavily criticized for a battling effort against the Eagles in the circumstances, but their playoff hopes are looking slim now.

The Falcons might have seen their Week 16 Lions game as a win in the bag, but Detroit will be arriving in town with a better record over the last 6 games (2-3-1) than their hosts (2-4)!

Daniel Jones’s season is over and the Giants’ season never really got going.

It’s 4 losses in a row now for the Panthers and they finish off with 2 games against the Bucs and 1 against the in-f0rm Saints. If they need some decent draft capital, it should be coming their way.

Da Bears keep showing glimpses of having talent around but it’s mixed in with big dollops of incompetence and disaster, so it’s really hard to evaluate.

The Texans have conclusively proved that they can beat the Jaguars, having comfortably done it twice, but overcoming non-Jaguar teams is likely to remain an issue.

How many safeties, interceptions and fumbles do we think there will be when the Jets play the Jaguars on Sunday? It’s possibly the same answer whether you think they’ll be doing it on purpose or through a lack of talent…

If the Jaguars lose, the No. 1 pick is pretty much in the bag, as they finish against the Patriots and Colts. The level of this game will be fascinating if the Jags need to find a way to lose to a Jets team that just put 15 players on Covid reserve. What times we live in.