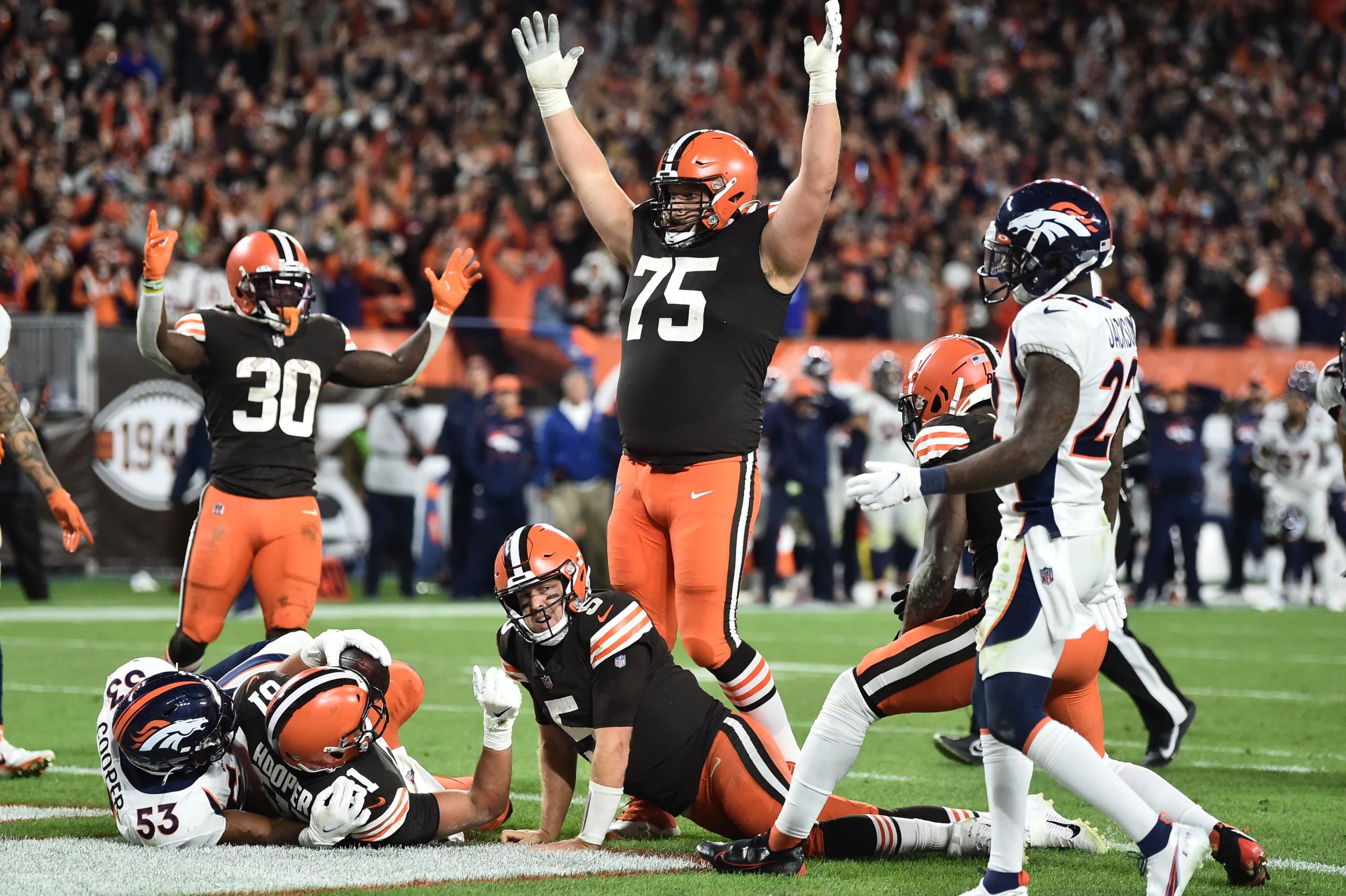 Week 7 proved to be a good time for the Cleveland Browns to be banged up. Baker Mayfield was out. Nick Chubb was out. Kareem Hunt was out. But the good news is that when you go up against the Denver Broncos, you don’t have to score that many points to win.

And the Browns didn’t score that many points, but 17 were enough to get the job done. Cleveland survived 17-14 on Thursday Night Football, getting a win it absolutely had to have. A loss would have dropped the Browns under .500 for the first time this season and would have sent them 2.5 games behind the Baltimore Ravens in the AFC North. Instead, head coach Kevin Stefanski’s squad is 4-3 and well within striking distance in the division at 1.5 games back.

Let’s recap what happened in Cleveland on Thursday night and break down what it means moving forward.

Browns can run it on anyone

No Chubb, no Hunt, no problem… D’Ernest Johnson filled in to be the workhorse out of the backfield and to say he made the most of his first career NFL start would be a gross understatement. An undrafted rookie out of South Florida in 2018, Johnson rushed 22 times for 146 yards and 1 touchdown. He also caught both of his targets for 22 yards.

Seriously, how good is the Browns’ offensive line? Sure, Johnson was impressive. But you can probably stick just about any competent professional football player back there and they could churn out yards behind that mass of humanity. Cleveland was already No. 1 in the NFL in rushing at 168.5 yards per game heading into Thursday and it racked up 182 against Denver—which had been fourth in the league in rushing defense at 85.5 yards per game allowed.

Anyone have D'Ernest Johnson +700 to score the first TD?

Replacing Mayfield, Case Keenum managed the game well by completing 21 of 33 passes for 199 yards with 1 touchdown and no interceptions. He also used his legs to convert a clutch 4th-and-3 at the Denver 6-yard line late in the third quarter. That led to Keenum tossing a TD pass to Johnny Stanton, giving Cleveland a 17-7 advantage.

That’s all well and good for the Browns, but things will get tougher in a hurry. Their next three games are vs Pittsburgh, at Cincinnati, and at New England. Those may not be juggernauts of opponents, but Cleveland’s backups will surely have to produce more points than they did against an offensively challenged Denver team.

Broncos and the under!

There isn’t much good to say about the Broncos. They have a quarterback controversy in which neither option is good (Teddy Bridgewater, who played on Thursday, and Drew Lock) and they rushed for just 41 yards against the Browns. Denver also lost star linebacker Von Miller to an apparent ankle injury. Although a 3-4 record isn’t terrible, 3-4 when you used to be 3-0 and when you are in a division with the Kansas City Chiefs and Los Angeles Chargers feels a lot, lot worse.

But, hey, at least the Broncos covered for us! We got them at +3.5 and they kept it within a field goal, and their offensive ineptitude contributed to an easy win on Under 42.5 — which was our best bet of the day.

We also cashed our third consecutive Thursday Night Football same game parlay; that’s right: three in a row. Although we only got +3 with the Broncos in the SGP and thus that leg was pushed, both the under and Johnson scoring a touchdown were winners.

Let’s keep the momentum going into the weekend; don’t forget to check out all our picks for every Week 7 game!