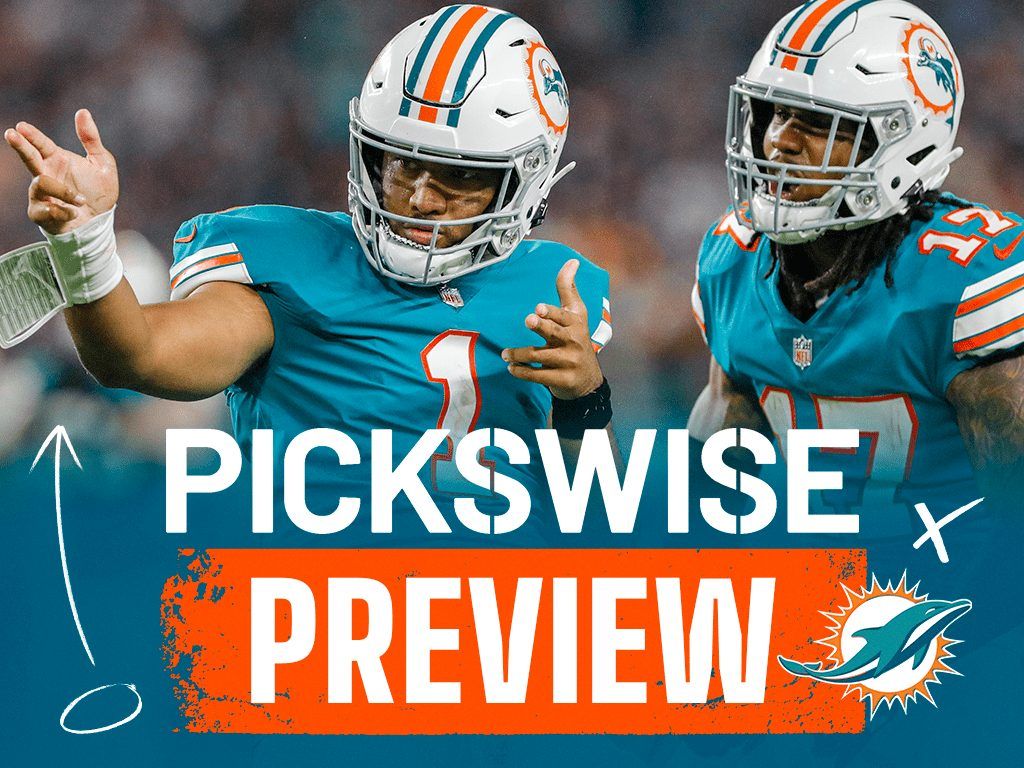 If Tua Tagovailoa can’t succeed with Tyreek Hull running routes for him, perhaps it will be the end of the road for the third-year quarterback with the Miami Dolphins. After all, Tagovailoa also has Jaylen Waddle in the receiving corps. With offensive weapons aplenty and a defense that was in the top half of the NFL both overall and in scoring last season, expectations are relatively high.

Unfortunately for the Dolphins, being in the same division as the Buffalo Bills may be a slight problem. Nonetheless, can Tagovailoa and company contend in the AFC East? Would a wild-card berth be a success? Let’s take a look at what could be in store down in South Beach.

The Dolphins are +4000 to win Super Bowl LVII, which pretty much has them in the middle of the pack.

Miami is +2000 to capture the AFC title, tied with the Las Vegas Raiders and Tennessee Titans as the ninth choices in the conference. The Buffalo Bills are +300 favorites.

At +450, the Dolphins are second favorites in the AFC South. Buffalo is a -225 favorite.

The Dolphins finished just a half-game out of a wild-card spot in the AFC playoffs (9-8 to the Steelers’ 9-7-1). It may not have been quite as close as that difference would suggest since Miami was already eliminated heading into the final week of the regular season. Still, compiling a winning record and being in contention through 17 weeks of the year isn’t too bad for a team that began the 2021 campaign. That’s right; the Dolphins were 1-7 at one point and then went 8-1 the rest of the way.

Tagovailoa and Jacoby Brissett split time at quarterback, with the former tossing 16 touchdown passes and 10 interceptions. Waddle raised eyebrows to the tune of 1,015 yards and six TDs (also scored once on the ground) and TE Mike Gesicki hauled in 73 passes for 780 yards and two scores. They helped Miami soar down the stretch, giving this franchise heaps of momentum heading into 2022.

Miami’s major move in the offseason was bringing in Hill to rejuvenate the offense. He should be able to do just that. In four of the last five seasons Hill has amassed at least 1,183 receiving yards and in two of the last four years he has caught at least 12 touchdown passes. Obviously playing in the Kansas City Chiefs’ offense helps and expectations have to be measured with the change of scenery, but there is no doubt that Hill is talented enough to completely reshape what the Dolphins look like on that side of the football. If the defense simply remains as solid as it was in 2021, this team can improve. And, as mentioned above, the ‘Fins have to be armed with a ton of confidence following last season’s second-half hot streak.

Having to face the Bills twice certainly isn’t ideal, but the Dolphins also get two games with the Jets. The Patriots are decent, but they aren’t the Patriots of the Tom Brady era. The middle portion of the schedule is soft, so if this team can get to the bye week at 6-4 (or better yet 7-3) then it should be on its way. There is no reason to dive headlong off the Tagovailoa quite yet; he deserves one more shot. With Hill and Waddle at his disposal, he should be able to capitalize.

A 10-7 record should be good enough to make the playoffs. I think the Dolphins will be slightly better than expected, surpassing the over/under on their win total and cashing my best bet.