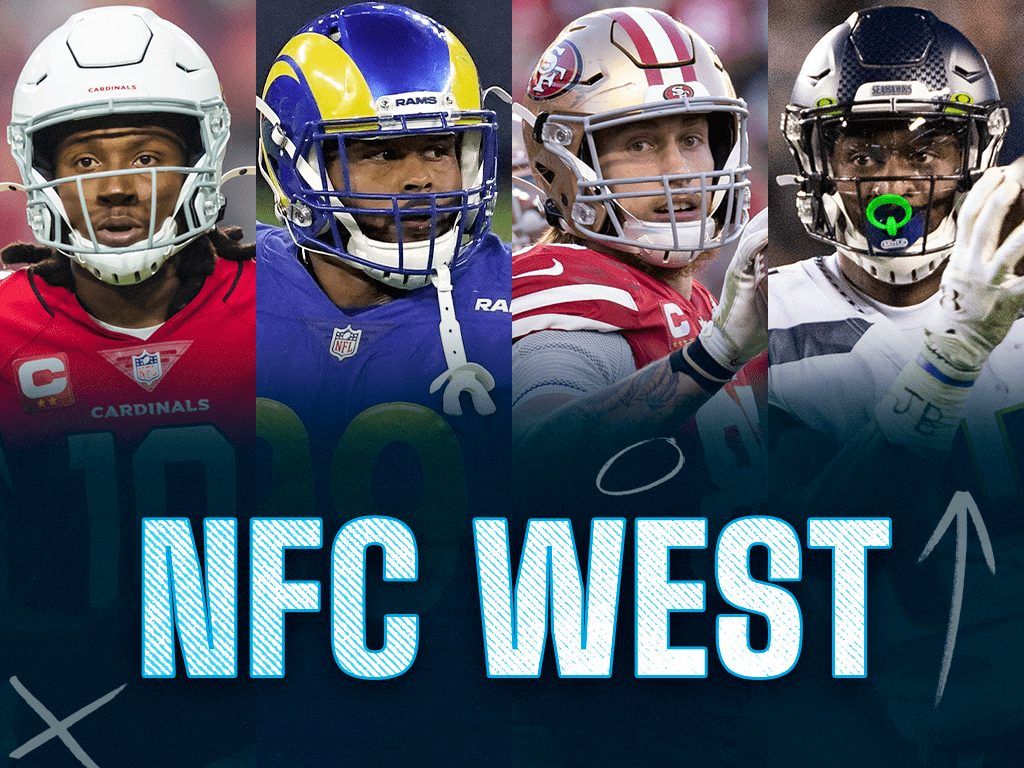 All 4 NFC West teams have won the division in the last 7 seasons, and that might have been the last 4 seasons if the Cardinals had not faded after their 7-0 (and then 10-2) start last year. The Rams were the last team to win in back-to-back seasons in 2017 and 2018 but the Super Bowl champions look to have a strong chance of keeping at least the divisional pennant this year.

Teams don’t always find it easy to follow up a Super Bowl success, but the Rams’ losses have been relatively light, with Odell Beckham Jr. (for now at least) and defensive star Von Miller the headline departures.

The Rams found it harder to win inside the division than outside it last year, with 3 of their 5 losses coming in their 6 divisional matchups (losing to the Cardinals and twice to the 49ers). Even so, they may have a greater margin of error over those rivals this year, while Seattle appears to have taken a major step back by trading away Super Bowl-winning QB Russell Wilson.

Let’s take a look at each team’s prospects in 2022 and their odds to win the NFC West.

After a disappointing end to the season, it’s been an offseason of change for Kyler Murray and company. The Cardinals brought in Murray’s former college teammate Marquise Brown after losing Christian Kirk to Jacksonville. Arizona also brought back tight end Zach Ertz and tried to fortify its defense in the draft. However, the Cardinals should not reach the heights of 11 wins this season.

They were not given an easy schedule with non-divisional games against the Buccaneers, Vikings, Eagles and Saints, and they’ll also be without the suspended DeAndre Hopkins for the first 6 games. A playoff appearance seems improbable.

The Rams may not be as good on paper as they were at the end of last season, but they also don’t have to be in order to remain successful. Even a slightly lesser version of the 2022 team will be good enough to make the playoffs – and perhaps even win it all again. Miller’s absence hurts, but the defense is still led by Aaron Donald, Jalen Ramsey and Leonard Floyd. Bobby Wagner will help to replace Miller, and on offense, Allen Robinson II will bolster the OBJ-less receiving corps.

A healthy Cam Akers returns, too, so QB Matt Stafford has a ton of weapons at his disposal. With a Super Bowl under his belt, it should be full steam ahead for the former No. 1 overall pick. There is no reason why this team can’t repeat.

Head coach Kyle Shanahan has made it clear that Trey Lance will be the starting quarterback of the 49ers this season as they move on from the Jimmy Garoppolo era. Keeping their best offensive threat Deebo Samuel helps, but the rest of the Niners’ receiving group is no more than average, and it could cause Shanahan to put more even more emphasis on their running game, which always has the ability to fool opposing teams.

One question that won’t need to be answered is their defense, which is projected to be a top-5 unit in the NFL. Led by Nick Bosa and Fred Warner, the 49ers’ defense should once again be their strong suit in 2022. San Francisco has one of the more difficult schedules in 2022 and it won’t be an easy year, especially with an inexperienced quarterback.

Either the Seahawks are a lot smarter than most NFL fans and really believe they can compete successfully in a meat-grinder of a division with Geno Smith or Drew Lock at quarterback, or they’re in for another season of struggle, even worse than last year’s, before taking their quarterback of the future high in next year’s draft. There are plenty of nice offensive pieces on the roster, with DK Metcalf having just signed a huge new contract and the dynamic Tyler Lockett a threat to all defenses, but neither of them is likely to look half as good now Wilson has gone. He was the master at turning a broken play into a long sideline conversion and that’s surely not going to be possible with their 2022 QBs.

Tight end Noah Fant is a nice addition and there’s hope at RB despite the retirement of Chris Carson, with Rashaad Penny showing up well late in the season and Kenneth Walker III added in the draft, but the young recruits to a shaky offensive line will take time to bed in. Defensively, the Seahawks have a lot of room for improvement and it’s hard to see where it’s going to come from. The Legion of Boom has gone bust. There are a few winnable games on the schedule but not nearly enough to think that a return to the playoffs is likely this season.

Defending a Super Bowl title is not easy but retaining the NFC West crown looks well within the Rams’ capabilities. Their rivals have even helped out by taking backward steps in the offseason with the 49ers and Seahawks likely downgrading at quarterback, while the Cardinals may have blown their best chance of glory by fumbling away last season’s red-hot start, and there remains a theory that the Cards have been winning in spite of head coach Kliff Kingsbury rather than because of him. The 49ers are taking a real gamble turning the offense over to a young and untested QB and while their system relies less on passing heroics than most other teams, it’s still a major question mark. The Seahawks have apparently turned their eyes to the future by making no big move for a QB to replace Wilson this season.

The Rams may even get current free-agent OBJ back when he’s recovered from his surgery, although the elbow soreness that has been bothering Stafford in training camp will be a concern until it clears up. Nonetheless, getting plus-money for the Rams to win the West with Cooper Kupp doing his thing again is hard to turn down.