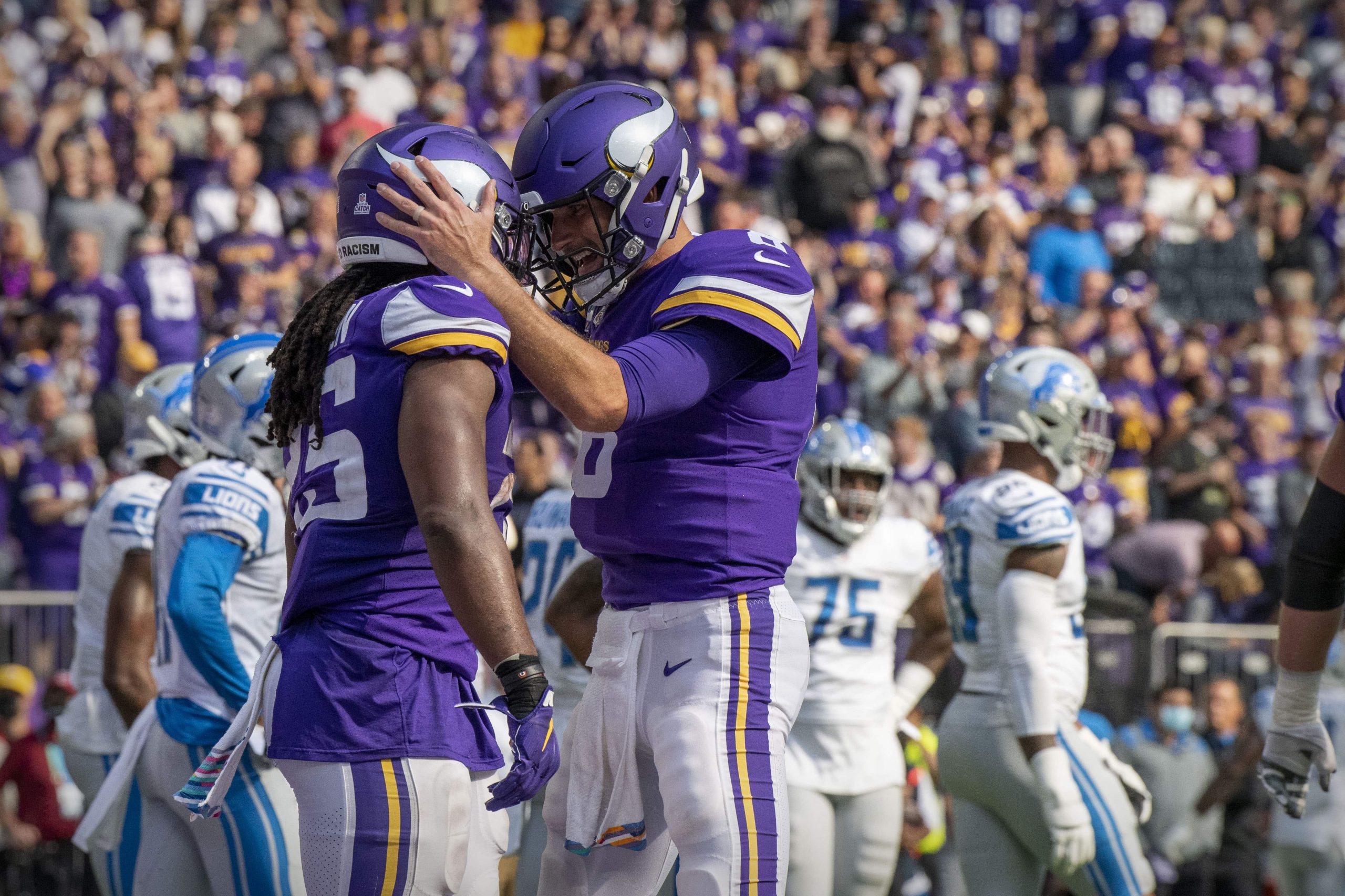 It’s hard to believe but we’ve almost reached the midway point of the NFL calendar. Time certainly flies when you’re having fun, and home teams finally had some fun last week, posting an above .500 spread and straight-up record for the first time all season. It’s a bit of a departure from the norm, as road teams have had the better run of play, going 58-46  (55.8%) ATS and 54-50 (+4.15 units) straight up this season. One reason for that could be the increase in the amount of points and plays per drive, illustrated below in a tweet from former Eagles analytics manager Ryan Paganetti.

Some interesting #NFL data helping kill HFA and leading to some teams struggling despite offensive firepower. # of drives = down. points per drive = way up (better O, 4th downs). TOP per drive = up. Plays per drive = up. Less game drives = more variance in game outcomes pic.twitter.com/0vsPz0BiQ7

More plays and time of possession per drive results in fewer drives per game, which creates more variance within each game itself. This also could explain why the Chiefs have struggled this season considering their high turnover rate and fewer overall drives per game.

But enough analytics, on to the selections. Let’s start with a slight nod to last week’s 5-1 performance. Teasers went 2-0 and are 8-2 this season, as line manipulation has been a winning strategy for us so far. But as they say, you’re only as good as your next bet, so let’s make this week count and keep the momentum going.

*Bet Sunday night at MGM, would play up to -3

If you would have told me 4 weeks ago the Falcons would be laying a field goal to Sam Darnold and the Panthers in this spot, I probably would not have believed you. But, that’s the push-and-pull nature of the NFL. I like what I’ve seen from Arthur Smith’s offense of late, averaging 29.0 points over the last 3 games. Kyle Pitts has also been unleashed with 16 catches and 282 yards in the last 2. Obviously Atlanta’s biggest weakness is the defense, but considering how poor the Panthers’ offensive line is playing (21 sacks over the last 5 games), I don’t expect Darnold to be able to fully take advantage. In fact, the Panthers failed to even reach the red zone on Sunday against the Giants, which is almost hard to fathom in an NFL game.

I acted swiftly on the Falcons right when the line came out on Sunday night, and it was the featured game in this week’s Early Birds column. The market has agreed with me as this line has already moved to -3, and some bookmakers believe the Falcons are still undervalued at that price. “My number is Atlanta -7.5,” said WynnBET Trader Sawyer Johnson. “The Panthers haven’t been a good team this season. I view them as overrated.”

*Bet on Sunday at Westgate SuperBook, would play down to +5

The Pats are playing pretty good football right now despite just a 2-2 overall record during that stretch with tight losses to the Cowboys and Bucs. The Chargers are coming off a bye, which should favor them, but I’m curious to see how Justin Herbert adjusts to the stout New England defense after last year’s 45-0 blowout loss, the worst game of his young career and the worst loss in franchise history. Bill Belichick has this funny way of getting inside the mind of young quarterbacks and perpetually haunting them.

The early-week splits in this game favor the Chargers, but only marginally. “Tickets are nearly split but over 60% of the handle is on Chargers,” said BetMGM Trader Darren Darby. Over at Wynn, “the market seems split, but the sharps like the Patriots.” That’s good enough for me, not only am I getting 5.5 points with what I believe to be the better defense, but I still think the books are undervaluing Mac Jones and how well he’s played in some pretty high profile games this season.

*Bet on Wednesday at DraftKings, would play down to PK

I noticed this line starting to creep towards Minnesota on Wednesday night, so I pounced as well and quickly pivoted away from my original strategy of patiently waiting for a full field goal. It was doubtful to get there anyways despite all the public love on the Cowboys. Perhaps the slight midweek movement was sparked by Mike McCarthy’s comments that Dak Prescott must “cross the threshold to make sure he’s full-go” from a lingering calf injury. The market expects Dak to play, but that quote does cast a shadow of doubt that he’s not back to 100%. I know it’s tough to stomach fading the Cowboys, who are 6-0 ATS this season, but NFL point spreads are designed to prevent teams from going on lengthy streaks against the number, so it’s safe to expect regression at some point.

“The public is going to be all over the Cowboys and the sharps will be on the Vikings,” said WynnBET Trader Sawyer Johnson. “According to my numbers, this game should be a PK.” My numbers say these teams are dead even in Net Yard Per Play and the Vikings have a slight edge in DVOA, so catching any amount of points at home with Minnesota is enticing. Up front, keep an eye on Vikings rookie left tackle Christian Darrisaw. If he can hold up against an athletic and aggressive Cowboys defensive line to give Kirk Cousins time to find Justin Jefferson and Adam Thielen in the deep and intermediate game, I like the Vikings’ chances to win this outright.

Friday Update: Clearly the situation has changed here as the line has flipped all the way to Vikings -3. It appears the market believes Dak is not going to play in this game. If you’re reading this and haven’t locked in your bet yet, I think Vikings -3 is fine as long as it’s confirmed that Cooper Rush is starting, since that would denote about a 3-4 point move from Prescott to Rush, which seems fair.

*Bet Sunday at DraftKings, would play Bengals up to -4.5

This line has moved significantly throughout the week as the public is hammering the Bengals. Admittedly this teaser is not as valuable unless you can move it to a field goal or shorter, but considering it’s a low total game, I would be comfortable moving Cincinnati from -10.5 to -4.5 as well moving it through. On paper it’s the Bengals’ defense that has impressed me the most, ranked 5th in DVOA. This could be a long day for Mike White, who is making his first career start and won’t be able to rely on a Jets running game that ranks dead last with 72.0 yards per game.

Bookmakers fear this line has become a tad stretched, with steady one-sided action early in the week. “With the Browns on deck I am tempted to dabble on the Jets,” said TwinSpires Trading Analyst Zachary Lucas. “Could be a letdown spot here.” I agree that it’s tough to lay double digits on the road with an unproven team like Cincinnati, which is why I prefer teasing this one.

Mike Tomlin has been the most profitable head coach as an underdog in the modern era, with a 40-20-2 ATS record during his tenure in Pittsburgh. With all the uncertainty surrounding the Browns quarterback situation, this is also a tough game to bet from a spread perspective, but considering how evenly matched these teams are on both sides, I feel confident that neither will win by double digits, especially with the total in the low 40s.

*Bet Sunday at DraftKings, would play Colts down to +7

The Bengals spot was so nice, I used it twice. If you don’t feel comfortable playing Cincinnati at -4 due to the line move, feel free to also pair the Steelers with the Colts in this slot. Indianapolis continues to play well after a dreadful 0-3 start, and if they have any hope of stealing the division away from the Titans, they need to win this game and even the season series. Tennessee might have two of the best results of any team all season against the Bills and Chiefs, but they also have one of the worst in an ugly loss to the Jets.

Analytically speaking, the Colts have the edge in both Net Yards Per Play and DVOA, and I think their running game is on par with the Titans. Carson Wentz is also playing better than expected, and Ryan Tannehill has regressed this season, posting his worst overall QBR in three years as the Tennessee starter. This line has crossed zero twice already this week and it’s unlikely to touch three on either side, so getting a full touchdown in any direction is an attractive teaser option. “The sharps think that this game should be at a PK,” said WynnBET Trader Sawyer Johnson. “They played the Titans +1 and after the line moved, they played the Colts +1. I bet this game closes as a PK.”

*Play up to a half-unit each

Eagles -3: This line briefly touched -3 early in the week, which was quickly gobbled up by the sharps. If it drifts back to that key number on Sunday, Philly is a play.

Bears +3.5: You can get +4 now after the Khalil Mack news. It’s tough to lay that much on the road with the Niners considering how inconsistent their offense has been and I would not be surprised if the Bears are better without Nagy on the sidelines.

Titans at Colts Over 50.5: The over is 25-7-1 (78%) in Titans’ regular season games with Ryan Tannehill under center, the best mark in the NFL during that span.

Jaguars at Seahawks Over 43: Geno Smith’s first 2 starts have come against the Steelers and Saints, 2 of the best defenses in the NFL. I expect the Seahawks to open things up against a Jags defense allowing 6.3 yards per game this season.

Bucs at Saints Over 50.5: The Bucs run the most efficient offense in the NFL and the Saints have Jameis Winston, who will not be shy to sling it deep against his former team.