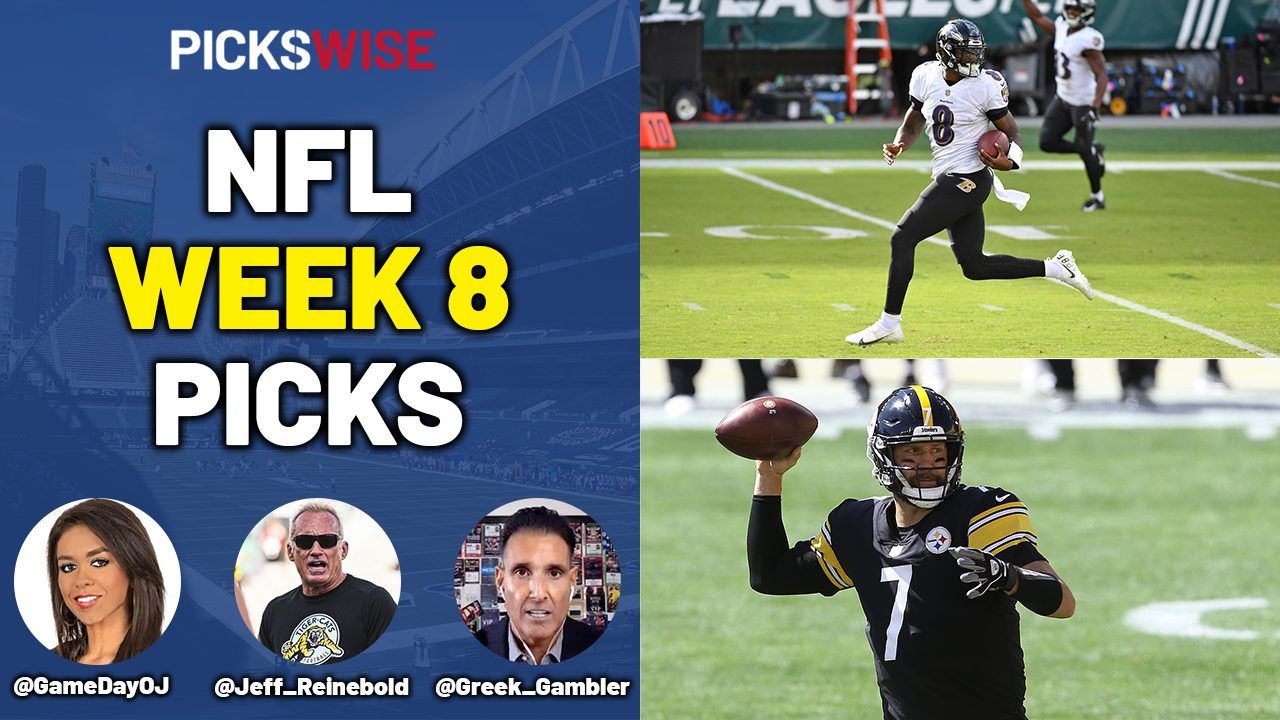 It’s Week 8 of the NFL season and we’re back with another episode of the Pickswise NFL Show! Our NFL betting preview is hosted by Rachael Van Oranje from ESPN975 radio and Jeff Reinebold, a man with over 30 years of coaching experience and a sharp eye for betting picks.

This week, they are joined by special guest Gianni Karalis, better known around the betting world as The Greek Gambler! Gianni is a professional bettor and is on hand to give his best picks for the NFL matchups.

The biggest game of the Sunday afternoon slate, and indeed the entire weekend, is the huge AFC North rivalry clash between the Pittsburgh Steelers and the Baltimore Ravens. The Steelers travel to Maryland with a 6-0 record, while the Ravens have lost just once — and that was to the Super Bowl champion Chiefs. Find out who our panel expects to secure the win and finish the day top of the AFC North.

We’ve also got a crunch game in the NFC West when Seattle host San Francisco. The Seahawks suffered their first defeat last week against the Cardinals in overtime. Can Pete Carroll’s team bounce back, or will the 49ers earn their third straight win?

Sunday Night Football features yet another divisional matchup, as Dallas visit Philadelphia in the NFC East. Despite each holding two wins, both teams are firmly in the playoff hunt and can take a big step to the postseason with victory here.

We’ve also got Monday Night Football between the Tampa Bay Buccaneers and New York Giants to look forward to. Can the Bucs continue their hot streak with another crushing win?

Along with the NFL previews for the biggest games, Rachael and Jeff provide us with their Pickswise parlay of the week, as well as their best underdog bets, a team they fancy to upset the odds. Last week both their underdog picks cashed against the spread, as Cincinnati +3.5 and Carolina +7.5 got the job done.

As always, you can also read our expert previews for every Week 8 game in the NFL.