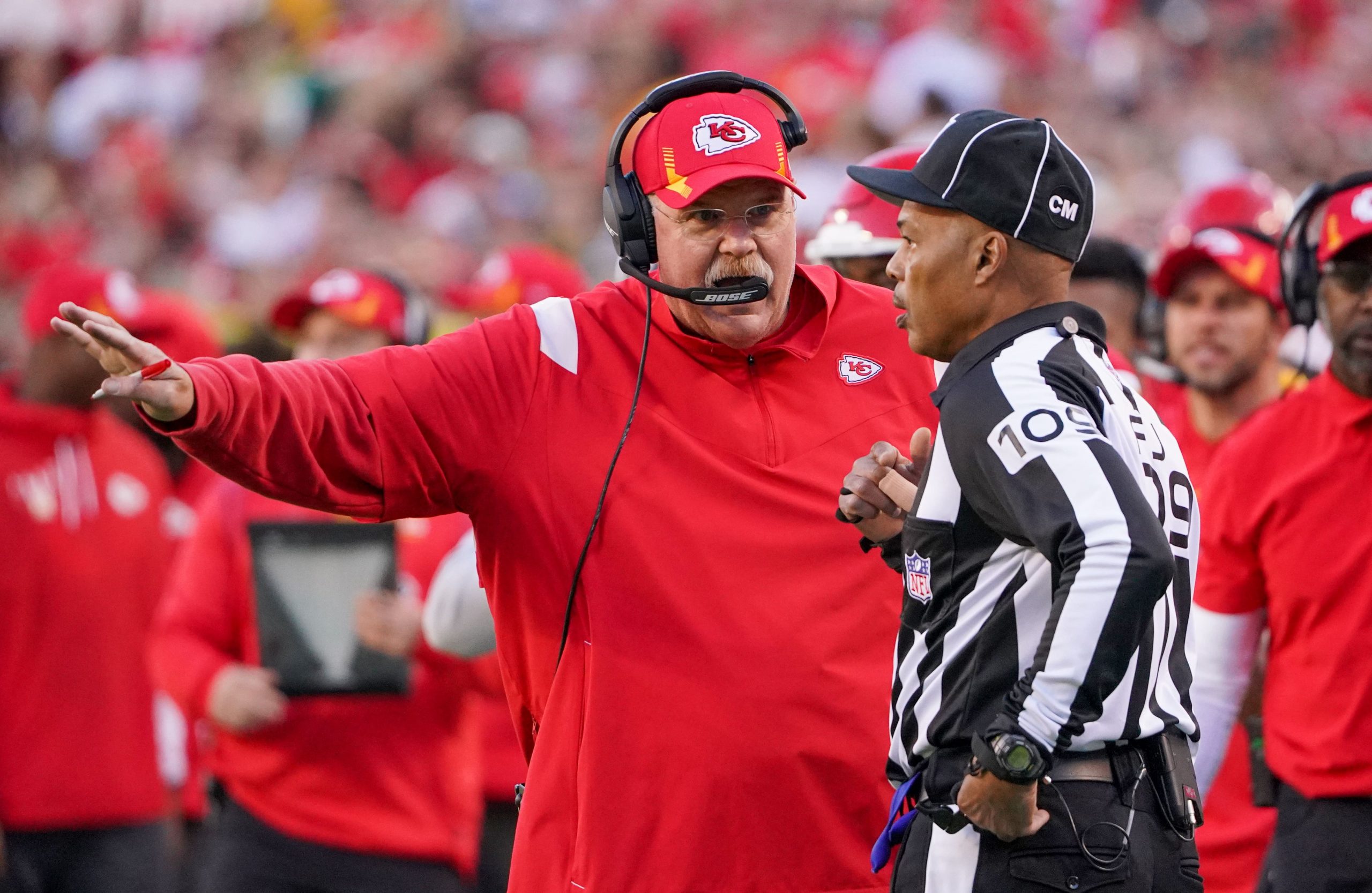 We’ve been expecting you, Mr Reid. Yes, after 9 weeks away, and a plunge as far down as No. 9 in Week 9, the Kansas City Chiefs have made their way back to the top of the Pickswise NFL Power Rankings just in time for Thanksgiving.

Let’s take a look at how the computer ranks all 32 teams heading into Week 12.

At the start of the season you would have thought it crazy that a team with 4 losses in their first 11 games could be considered the best, but what can our poor computer do when presented with results such as the Titans losing to the Texans? It decided to take note of the Chiefs’ 4-game winning streak and a solid win over a terribly disappointing Dallas Cowboys team. That’s hard to argue with looking at the list of flawed candidates coming up next.

The Packers were on top last week, but they can’t stay there after losing to the Vikings. The Packers’ record is looking a little lopsided as they’ve now played 7 road games and only 4 at home, where they’ve been perfect so far.

The Bucs are another team who are perfect at home, this time 5-0, and they’ve got a great game coming up on Sunday as they visit the Colts.

What’s this? An NFL team with only 2 defeats? How unusual! The Cardinals gambled that they could beat the floundering Seahawks without risking Kyler Murray, and they were right.

The computer took its time to forgive the Colts for their 1-4 start, and they were still down in 12th last week, but thrashing the Bills has propelled them 7 places up the list. They have the Bucs, Pats and Cards in their next 4 games, so any further progress will be hard-earned.

The Bills have 3 defeats and wins over the Dolphins and Jets in their last 5 games and that’s not going to cut it in the top 5.

There’s a case to be made for the Patriots deserving to be even higher than this after 5 wins in a row. They’ve allowed only 13 total points in their last 3 games.

If computers had emotions, ours would not be on speaking terms with Mike Vrabel after last week’s No. 4 team managed to lose to the 31st-ranked Texans. And it wasn’t even close! They don’t have long to get a LOT better though, as they play the Patriots this week.

The Rams have had a week off to think over their losses to the Titans and 49ers and teach OBJ the playbook. It could be a fun game against the Packers this week if they’re back to their best.

Five of the Ravens’ 7 wins have come in games that they looked well on their way to losing, and the masters of the late comeback did it again in Chicago with Tyler Huntley filling in for Lamar Jackson. The Ravens have a claim to having the toughest home stretch in the league as they now face: Browns, Steelers, Browns, Packers, Bengals, Rams and Steelers to finish.

It’s 3 straight losses for the Saints, who found losing both their offensive tackles too much to overcome against the Eagles. The bigger question, though, is whether there is anyone outside the Saints’ front office who would have given that huge contract to backup QB/hybrid tight end Taysom Hill?

The Cowboys won’t be popular around the AFC this week for their awful effort in Kansas City, scoring just 9 points. I’ve still got a headache just from watching the replay of CeeDee Lamb banging his head on the turf in that game, so let’s hope the man himself is okay.

The 49ers look to be getting it together in their last 2 games and slot in 3rd in the socially-distanced NFC West, where the teams have 9-7-5-3 wins.

The Chargers really looked to be Chargering hard the other night, tossing away a comfortable lead to find themselves trailing late against the Steelers. But in a new twist, they managed to un-Charger and win. It may also be worth checking the odds on Justin Herbert overtaking Derrick Henry and Jonathan Taylor to seize the rushing yards title – the man was bounding along like Forrest Gump.

The Vikings finally won a big one, beating the Packers. Kirk Cousins has thrown 21 TD passes and only 2 interceptions this season, which is pretty impressive. Although it really looked like Darnell Savage had picked him off twice — one was negated by a penalty and the other overturned after a review.

Well, the Browns won against Detroit and there’s not much more you can say. They were truly awful and ended up hanging on to win 13-10 in a game they should have won by 30 if playing at just their par level. On a more positive note, RB Kareem Hunt and RT Jack Conklin could be back this week.

The Steelers tied the game Ben Roethlisberger missed and lost when he returned against the Chargers, but their defensive absentees were a bigger problem.

It might look a little strange that the Bengals are 18th, given that if they win this week they will have the same record that the No. 1 team has now. Consistency has been an issue but when they’re good, they can look very good.

It’s pretty much over for the Seahawks after 5 losses in their last 6 games. The team from Washington state have a long trip to play the Washington Football Team this week, but they at least have until Monday night to get there.

It’s 3 wins in the last 4 for the Eagles and with a soft-looking schedule remaining (they have the 2 New York teams next, for example), they could yet be in the hunt for a wild-card place.

A 4-7 record for the Dolphins looks a lot better than 1-7 did 3 games ago. Tua Tagovailoa completed 27 of his 33 passes in one of the week’s more unexpected stat lines.

Washington are another team showing signs of life that weren’t there a few weeks ago. Ron Rivera got the W against Cam Newton and with a couple of struggling teams up next in Seattle and Las Vegas, there’s still hope for the WFT.

The Broncos must have had a fairly solid bye week as they have ended it exactly where they were before.

The Panthers can’t seem to get a consistent run going but with the Dolphins and Falcons next they’re not quite finished yet.

It’s 3 losses in a row for the Raiders and they haven’t been particularly close. They provide some of the Thanksgiving Day entertainment as they visit a Cowboys team with a point to prove.

The Bears got a break when Lamar Jackson was ruled out, looked like they had taken advantage of it but then managed to lose anyway. Their game against Detroit is not the entertainment extravaganza you might have wanted but it remains an alternative to talking to relatives on Thanksgiving Day. So it’s not all bad.

Check out our full game preview for Bears vs Lions

The Falcons have scored 3 points and allowed 68 points in their last 2 games. Still, it’s the Jaguars next so anything could happen.

Oh boy! What a win for the Texans. They’re not even last in the AFC South any more!

If you just thought Falcons vs Jaguars sounded fun, we also have Jets vs Texans to enjoy this week. Is there a way we can turn these games into relegation playoffs?

The Jaguars were dominated by the 49ers. Still, falling behind the Texans due to their head-to-head Week 1 loss has given us a battle we can savor until the end of the season. No?

If the Lions had anything about them they would have come back to beat a Browns team who were there for the taking on Sunday, even with Tim Boyle at QB. But they look entranced by the losing bug with no belief that they could do anything about it. That sums up a No. 32 team.