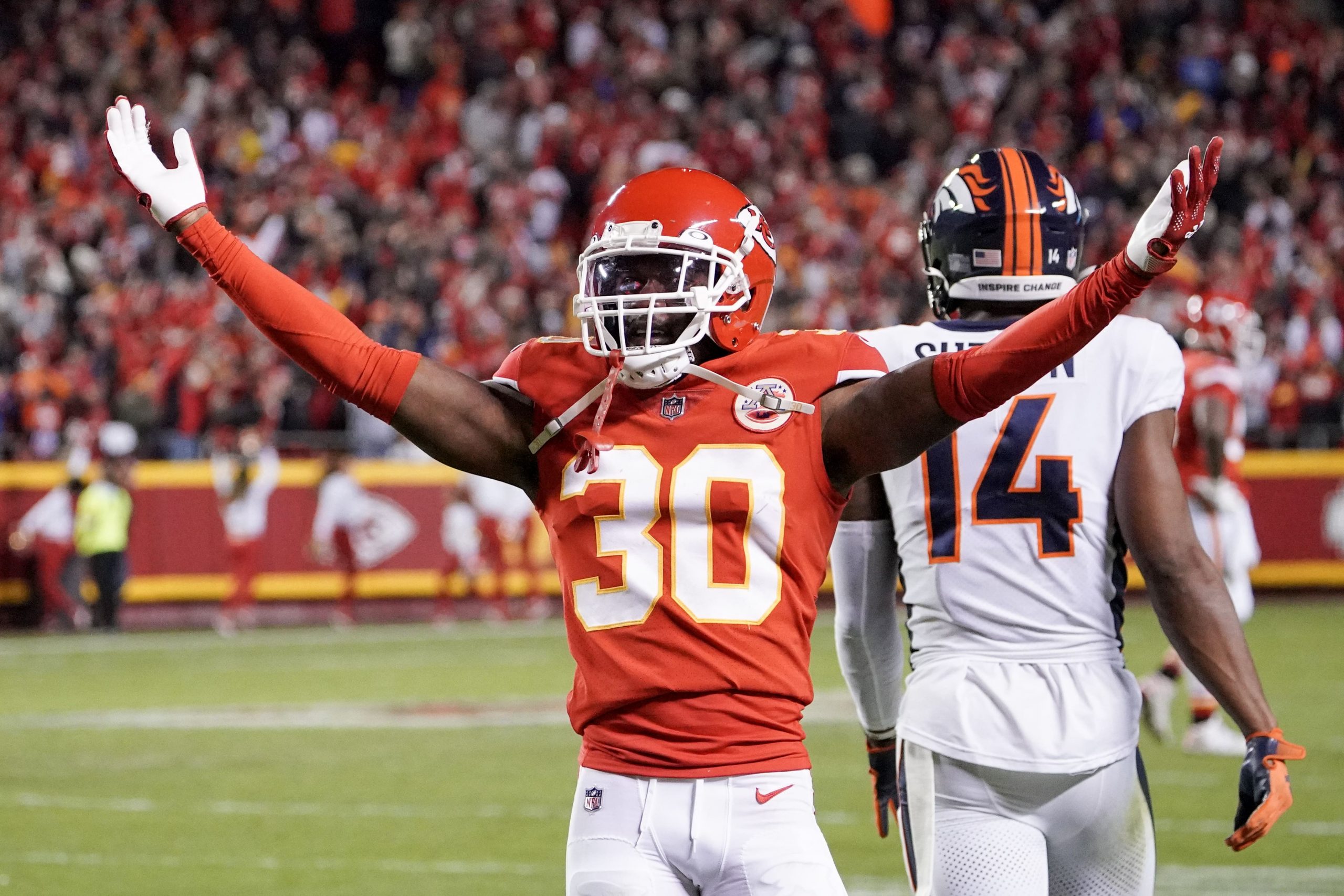 There’s change at the top and bottom of the Pickswise NFL Power Rankings with Kansas City hitting the top for their third separate spell at No. 1, getting their own back on the holidaying Packers, who had gone to the top during the Chiefs’ bye week previously.

But there’s also a change in last place, as the Lions, who had been ranked 32nd since Week 6, finally climbed off the bottom thanks to their win over the Vikings, sending the Jaguars back to the basement.

Let’s take a look at how the computer ranks all 32 teams heading into Week 14.

The Chiefs are still only 4th in the AFC playoff rankings after beating Denver, but 8-4 sure looks a lot better than 3-4 did and the computer has plenty of faith in Patrick Mahomes. A home stretch of Raiders, Chargers, Steelers, Bengals and the Broncos again is not the worst.

Similarly, Tampa Bay ranks only third in the NFC, but the Bucs also squeezed past the Packers on their bye week by smashing Atlanta. They get a tough test this week against Buffalo, but after that they have no more teams with winning records on their schedule.

The Packers won’t feel too bad about slipping in our rankings if they clinch the NFC North title this week, which will happen if the Vikings lose to the Steelers on Thursday and they beat the Bears (registered owner: A Rodgers) on Sunday Night Football.

The Cardinals are the first team to reach double-digit wins this season after causing Andy Dalton to malfunction badly in their win over the Bears. They ‘arrived’ with their road win over the Rams in Week 4, but maybe they need to do it at home too on Monday Night Football to be taken really seriously?

The Bills didn’t just get cold and run over by the Patriots on Monday. They also fell back into the AFC wild-card scramble which has no fewer than 9 teams on 6 or 7 wins.

The Colts are one of the teams in that fight, but they’re also hot on the trail of the Titans in the AFC South, moving to just one win behind by shutting out the Texans. They have a week off to think about how to stop the Patriots when they return. Run defense may be high on the priority list.

The Ravens can count themselves lucky to stay in 8th place after the tame way in which they collapsed in their defeat to the Steelers. Their secondary suffered another significant blow with the loss of Marlon Humphrey and a loss to the Browns this week would make the AFC North race even tighter.

The Rams ended their 3-game skid thanks to that remedy for all ills of playing the Jaguars. Things get tougher again this week, though, as they visit the Cardinals.

Hey! Guess who else is on a badly-timed dip in form that could be cured by playing the Jaguars? That’s right, it’s the Titans. Julio Jones could be back soon, but the Tennessee roster is still far from full strength.

You shouldn’t read too much into the Cowboys’ win over a shell of a Saints team, but things in the NFC East should be much clearer after they’ve played Washington twice in their next 3 games.

The Chargers get a nice jump up from 17th for thrashing the Bengals and they’ll be aiming to record back-to-back wins for the first time since Week 5 when they play the Giants.

Losing to the Seahawks took the wind out of the 49ers’ sails after 3 wins, as they found the absence of Deebo Samuel too much to overcome, even with George Kittle getting 181 receiving yards. Much depends on whether Good Jimmy G or Bad Jimmy G shows up from game to game and even drive to drive.

The Browns managed to climb a place on their bye week but losing 2 tight ends (Harrison Bryant injured, David Njoku Covid protocols) isn’t ideal for the team that runs the most 3TE sets in the league.

The Seahawks have a chance to win back-to-back games for the first time this season when they meet the Texans, but the outlook is still pretty grim. At least tight end Gerald Everett is due for some positive regression after managing to be responsible for 3 turnovers in 1 game.

The Dolphins have followed 7 losses with 5 wins and they might be able to keep that going as they get the Jets after their late bye this week.

It’s 5 losses in a row for the Saints, who have fallen to the bottom of the NFC South under the weight of a lengthy injury list. They’re 5.5-point road favorites against the Jets this week. Any takers?

The Steelers breathed life into their season with the win over Baltimore, albeit after scoring only 3 points in the first 3 quarters. Their Thursday showdown against the Vikings is not likely to get the highest viewing figures of the season, but the potential for weird things to happen seems high.

“Shame… shame… shame”. Yes, ring the bells, point and laugh, the Vikings became the first team to lose to the Lions this season and they deserved to for their pathetic effort of defending the final drive. Adam Thielen’s injury is a major blow too, but Alexander Mattison still looks good whenever he replaces Dalvin Cook.

I’m not surprised the computer isn’t swayed to lift the Eagles any higher as the best team they’ve beaten in their 6 wins is the 6-6 Broncos. Clearly it doesn’t award any extra points for sparking a new wave of Minshew mania. Their win against the Jets was at least pretty entertaining and now they will close out the season with 4 divisional games after their bye week, including 2 against Washington.

Every time the Bengals start to be taken seriously, they do something to prove they shouldn’t be. Beat the Ravens by 24? Lose to the Jets next game. Thrash the Steelers 41-10? Lose by 19 at home to the Chargers. A 7-5 team should really be higher than 21st but the computer is clearly punishing them for making it look silly when it put them 13th last week.

Here’s a team on the rise. It’s 4 wins in a row for Washington, who now end the year by taking part in this weird NFC East tournament, with their last 5 games all in their division.

Losing to the Chiefs is not the worst result a team had last week but now the Broncos must raise themselves to tackle the momentum-fuelled 1-10-1 Lions.

It’s 4 losses in their last 5 for the Raiders, and with a tough closing schedule, starting with the Chiefs this week, it looks to be a case of limping to the end of season to regroup.

The good news for a Carolina team that is 2-7 in the last 9 games is that they’re playing a team they beat in that run, Atlanta, this week. There was a lot of thinking to be done over their bye last week after their horrible loss to Miami before the break.

The Giants have lost the game following all 4 of their wins this season, but they aren’t burdened by the weight of a victory this week at least. A long trip to face the Chargers could prove problematic, though.

The Bears lost the plot entirely during their loss to the Cardinals, the 6th in their last 7 games, but on the bright side, at least their 2-point win over the Lions is worth a little more in retrospect now.

Mike Davis scored his first TD in 7 games (presumably after a successful campaign with his face on milk cartons) but the Falcons are 1-5 at home now.

The Texans are back in play for the first pick if the Lions’ revival continues and their showdown against the Jaguars in 2 weeks could have plenty riding on it in terms of the draft, at least.

Zach Wilson could do with a consistent run until the end of the season, but the Jets’ passing attack suffered another blow with the season-ending injury of Corey Davis. Tevin Coleman seems to be established as their leading rusher now having barely been used for much of the season.

One place? One place for a win AND a tie? Yes, we know, Lions fans, but the computer still has a lot more data that says you lost games than information about your win.

It’s 4 losses since they beat the Bills and any steps forward the Jags make always seem to be followed by 2 steps back. Does Trevor Lawrence look any better now than he did in Week 1?