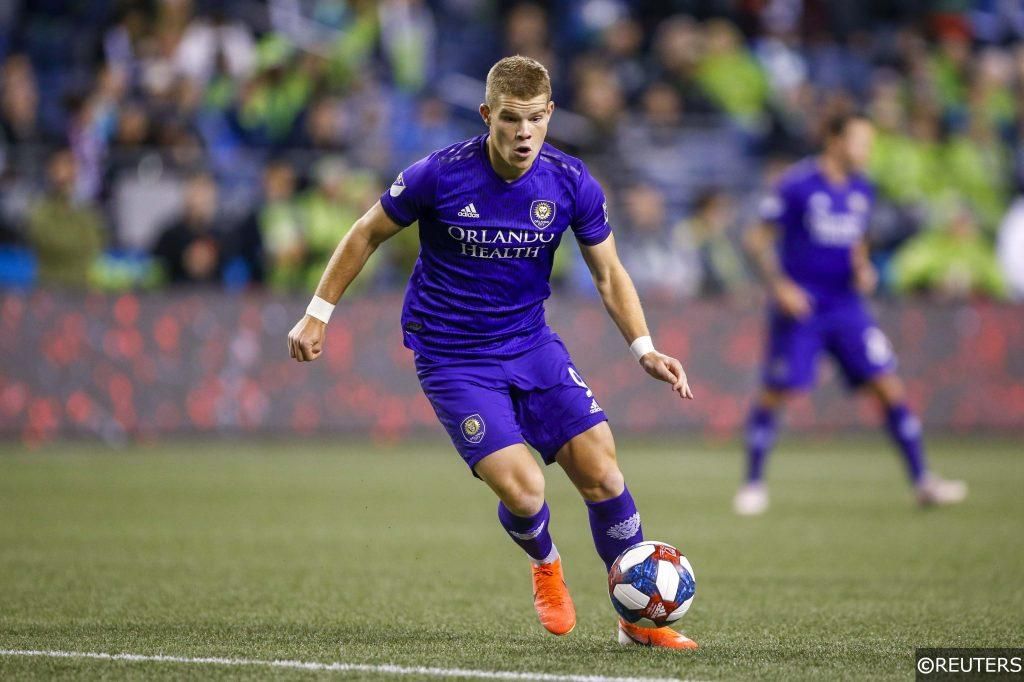 Matthew has been with Pickswise for a while now, covering a wide variety of sports. His main passions are college football and UFC, and those are the sports he has covered the most. Matthew uses a variety of methods to handicap games, including stats, trends, injuries, and situational factors. His goal is to consistently give out winners and will put in the research to try and achieve this.
@Sixfigurematt
Updated: 10:25 AM ET July 22, 2021

We’ve put together a four-pick cross-sport parlay that will take you right through Thursday, including action from the MLS and the MLB.

Two picks are taken from each sport and a winning ticket gives us a nice payout with odds at +2,326 with BetMGM; that’s more than 23/1! Let’s break down each of these four plays. Remember to gamble responsibly.

With Zach Eflin and Aaron Nola still on the injured list, Matt Moore continues to get a turn in the starting rotation. Moore comes into this matchup with a 5.25 ERA with a 1.61 WHIP and has completed five innings in only two of his seven starts this season. Moore has a 7.71 ERA with a 1.714 WHIP against Atlanta. Braves hitters have a .400 batting average and a .417 BABIP against Moore this season and even with no Ronald Acuna Jr, the Braves have the offense to give Charlie Morton the run support he needs. Behind Morton’s 2.83 ERA and .175 BAA on the road, back the Braves to get to Moore early and often and take the Braves money line.

The starting pitching matchup this evening will feature Jordan Montgomery against Tanner Houck. Montgomery owns a 4.18 ERA, 4.24 xERA, and a 3.72 FIP through his first 18 turns in the rotation this season. He has struggled somewhat over his last six starts, posting a 4.54 ERA and a 4.42 FIP, surrendering three or more earned runs on five occasions.

Houck has only 30.1 innings of big-league experience, but the early returns have been extremely promising for the Red Sox faithful. Split across two seasons, he owns a 1.78 ERA and a 2.85 FIP with an elite 30.3 strikeout percentage. The Yankees are still without Aaron Judge and are essentially rolling out a B-team lineup right now due to quite a few notable injuries. After having their matchup against Toronto postponed on Tuesday, the Red Sox bullpen is rested and should have everyone available to close the door on a win, if needed. Back Boston in this one as they look to start their weekend series on a winning note.

The Union are nearly unbeatable at home, but they’re much more vulnerable on the road. Philadelphia has gone four straight road matches without a win, conceding twice against Atlanta United and three times in Chicago. Given Orlando’s tendency to dominate at home (on multiple occasions this season they’ve won a home match by a margin of at least three goals), it’s hard to imagine a scenario in which they can’t score at least once over the course of 90 minutes. Nani, who leads the team by a long shot with seven goals this season, is both their most electric playmaker and their go-to option for penalties, which is how he scored his equalizer in Toronto last weekend. Bet on Nani finding the back of the net.

These sides met on May 30 in Seattle, playing to a scoreless tie – the only time the Sounders had been held without a goal prior to their loss in Minnesota. But Austin has been unable to sustain any momentum with their offense all season. The league’s newest team broke a stretch of seven games with only one total goal by putting up four at home against Portland to kick off July, giving their fans hope that the days of goal drought were behind them. Austin failed to score in their subsequent 2-0 loss to LAFC, despite taking 14 shots and controlling 60% of possession in that match. A depleted Seattle and a starved Austin match up well together, so don’t count on either team edging out the other, and bet on a tie.