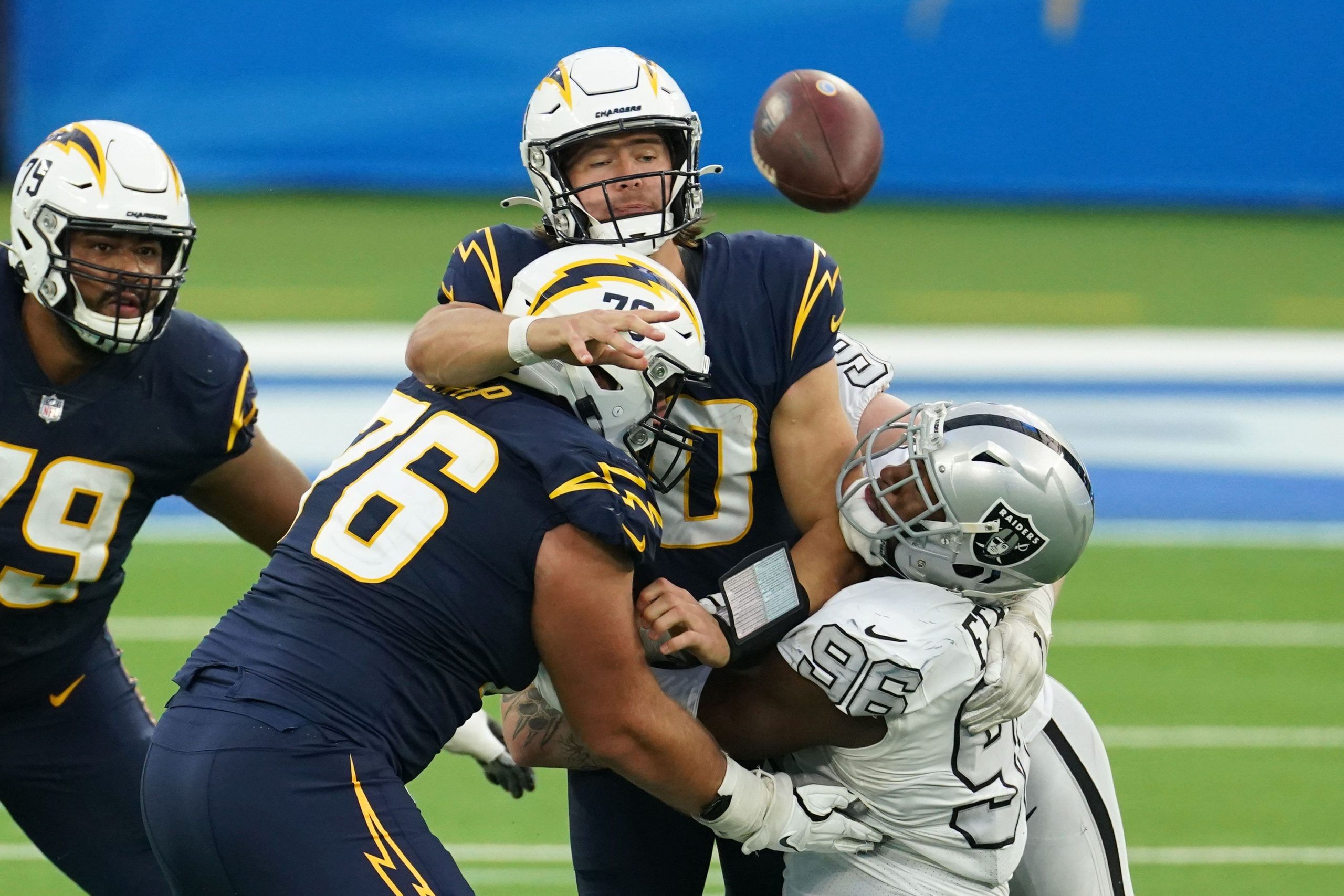 The Las Vegas Raiders are beginning a stretch of two consecutive primetime contests, and they have to win both of them in order to stay in postseason contention. Prior to facing the Dolphins in a Saturday night showdown during Week 16 action, the Raiders will host the Los Angeles Chargers for Thursday Night Football. At 7-6, head coach Jon Gruden’s squad is currently fifth in the AFC’s race for three wild-card spots. In other words, Las Vegas has to win, win some more, and also get help.

Speaking of help, the Raiders’ own schedule may offer some sort of consolation for their current struggles. Miami is their only winning opponent left, preceded by this date with the 4-9 Chargers and followed by a regular-season finale against Denver (5-8). The Chargers have not won two games in a row this entire year, and that is a feat they will be trying to accomplish after scraping past Atlanta 20-17 last weekend. Los Angeles’ other three victories in 2020 have come over the three worst teams in our power rankings: the Jets, Jaguars, and Bengals (and the Falcons are not much better at No. 26).

Be sure to check out our Chargers vs Raiders Thursday Night Football predictions for our expert handicapper’s picks, computer projections, and probabilities for the point spread, total, money line, and individual player performances.

The line has not done much of anything, although the Raiders were giving only a field goal at one point before moving slightly above that key number (now -3.5). It’s not hard to see why slightly more money has come in on Las Vegas. Los Angeles has been a disaster of late. Its win over Atlanta had a lot more to do with the Falcons and this team also got humiliated 45-0 two weeks ago by a mediocre New England squad. Even the Chargers’ lone bright spot in 2020, rookie quarterback Justin Herbert, has regressed of late with no better than 6.1 yards per attempt in four of his last five starts.

The total has been on a steady decline, opening at 55 at most books and now registering at 53 as of Wednesday. As mentioned above, Herbert has taken a step back—partly because head coach Anthony Lynn and the rest of the staff have not been opening up the offense for their young star. On the bright side for L.A., its defense actually played quite well against Matt Ryan and the Falcons. Meanwhile, Las Vegas just fired defensive coordinator Paul Guenther and that may light a fire under the unit.

How To Watch Thursday Night Football

In 2020 the consumer values options, and being able to stream Thursday Night Football beyond the traditional means of a cable TV channel, and TNF is a great facilitator of that.

Across 2020 there are four official ways to stream Thursday Night Football between Week 2 and Week 15 through the following means.

The season opener between the Houston Texans and Kansas City Chiefs did not fall under the banner of Thursday Night Football, with NBC holding the exclusive rights to the National Football League Kickoff game as part of its Sunday Night Football deal. The Thanksgiving games were also aired between various networks and not in line with the rest of the TNF Schedule.

The Week 16 Thursday Night Football game is actually being played on Friday (Christmas Day) and has a different start time to the rest of the TNF schedule, starting at 4:30 pm EDT.

The remaining Thursday Night Football start times are standardized and set to kick off at 8:20 pm EDT throughout weeks 1-15.