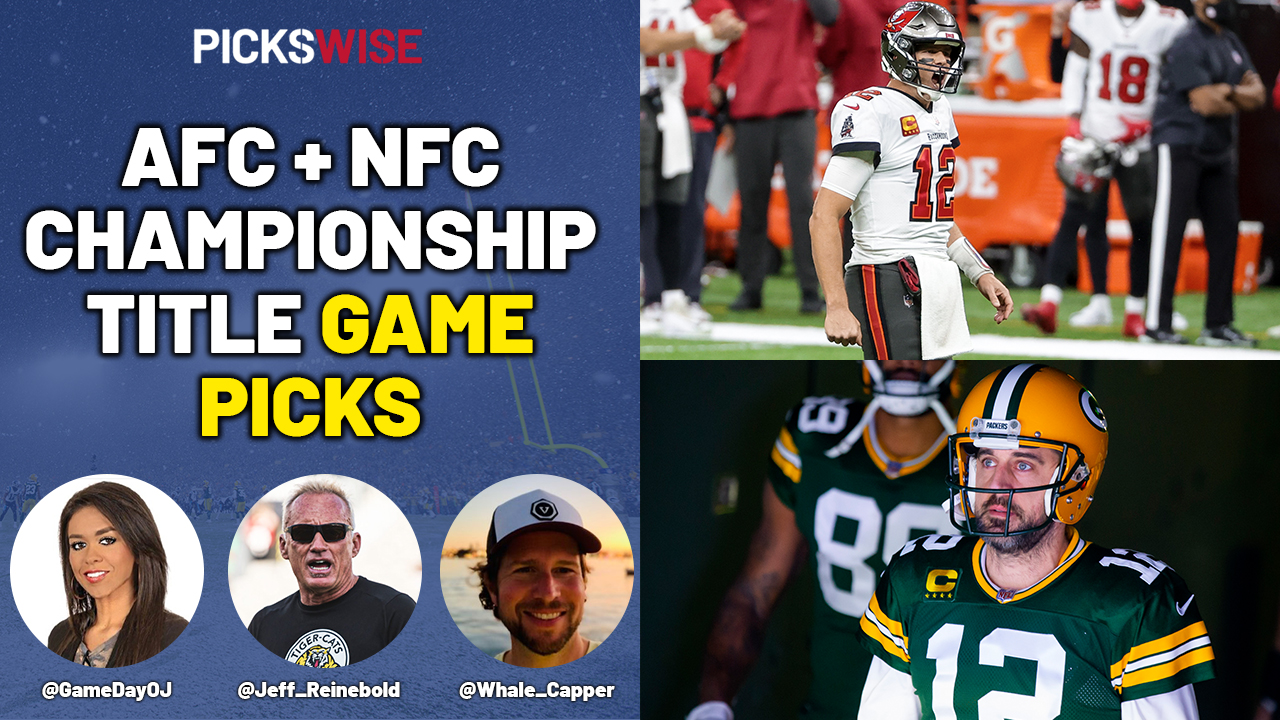 And then there were four. We are just two weeks away from Super Bowl LV with two huge Conference Championship games coming up this week,  and that means we’re back with another episode of the Pickswise NFL Show! Our NFL betting preview is hosted by Rachael Van Oranje from ESPN975 radio and Jeff Reinebold, a man with over 30 years of coaching experience and a sharp eye for betting picks.

This week, Rachael and Jeff are joined by Drew Dinsick, an NFL handicapper who has produced winning results in each of the past three seasons. Those three will break down both of Sunday’s huge games while giving their best picks and bets.

We’ve also crunched the numbers and found the best conference championship betting trends for the NFL playoffs, so be sure to check those out before placing any bets for the weekend’s games.

Championship Weekend kicks off on Sunday afternoon with the NFC Championship game between the Tampa Bay Buccaneers and the Green Bay Packers. Both offenses have been flourishing lately, with the Packers in particular crushing the Rams’ top defense. Now after all these years we finally get to see Tom Brady take on Aaron Rodgers in the playoffs. Which veteran quarterback will come out on top? And will the Buccaneers be heading back to Tampa to effectively play a home game at Raymond James Stadium for Super Bowl LV?

That red-hot clash is quickly followed by the AFC Championship contest with the Buffalo Bills taking on the Kansas City Chiefs. The big story for this game is whether Patrick Mahomes will be able to suit up, after he left the Chiefs’ 22-17 win over the Browns through injury. If he can’t play, then Chad Henne will be under center for the Chiefs, and the Bills and Josh Allen will know this could be their best ever chance of making the Super Bowl. Buffalo’s offense has been fantastic, but can they get it done when it really matters?

Along with the NFL previews for each playoff game, Rachael, Jeff, and Drew provide us with their Pickswise Lock of the Day. Seeing as Jeff went 12-5 with his underdog picks over the course of the season, and Drew boasts a tremendous betting resume, let’s see if they can find you a couple of winning picks.

As always, you can also read our expert previews for both the AFC and NFC Championship games of the NFL playoffs.