The Los Angeles Rams will be playing on Sunday Night Football for the second time this season when they face the San Francisco 49ers in a NFC West rivalry showdown during the NFL’s Week 6 festivities. L.A. kicked off its 2020 campaign with a 20-17 home win over the Dallas Cowboys on primetime. Now the Rams are going on the road, taking their talents—and their 4-1 record—a few hundred miles north. It may not be quite as daunting of a task as it originally looked like on the schedule, because the 49ers (2-3) have been a huge disappointment.

It has not been entirely San Francisco’s fault. The injury bug has ravaged almost the entire league, and this squad is certainly no exception. Among the victims are defensive end Nick Bosa (out for the season) and quarterback Jimmy Garoppolo, who missed two-plus games with a high ankle sprain but is expected to start on Sunday. The 49ers at least managed to begin the year 2-1 because they had the amazing benefit of playing each of the two New York teams, but they have since lost to the Philadelphia Eagles and Miami Dolphins—the latter by an absurd 43-17 margin. Having opened 2020 as the No. 5 team in our Power Rankings, they now find themselves down in the 22nd spot.

The Rams, on the other hand, are three points away from being undefeated. Their only blemish has come at the hands of Buffalo (also 4-1), a 35-32 road setback in Week 3. The jury is still out on Jared Goff and company, however, because all four of their victories have come at the expense of the moribund NFC East.

Be sure to check out our Rams vs 49ers Sunday Night Football predictions for our expert handicapper’s picks, both ATS and O/U.

Coming out of Week 5, when the Rams hammered the Washington Football Team 30-10 to coincide with the 49ers’ disastrous performance against Miami, Los Angeles emerged as a -3 favorite. The line has done nothing, as bettors seem content with that number to the extent that the visitors are still giving a field goal. Caution is probably being taken given that San Francisco remains talented enough to get going at any moment, but at the same time it is hard to generate enthusiasm around the home team given its current state. Garoppolo was benched against the Dolphins, so it is even harder to be confident about his chances of finding success against a superior L.A. defense.

As for the total, it opened at 49.5 at most books and has since climbed to its current 51.5 number. Thus it presents an even better opportunity for an under bet than it did earlier in the week. Garoppolo’s struggles are well-documented and the Rams have given up a grand total of 19 points in their last two games.

How To Watch Sunday Night Football

The Sunday Night Football schedule throughout the 2020 NFL season is straightforward. All 16 games (there is no Week 17 SNF game) kick off at 8:20 PM Eastern and are televised on NBC.

Of course, this is the year 2020 and consumers value different options. Being able to stream Sunday Night Football beyond the traditional means of a cable TV channel is important, and there are ways to do it. Here are four different streaming services:

Sunday Night Football kicks off at 8:20 PM Eastern each and every week. 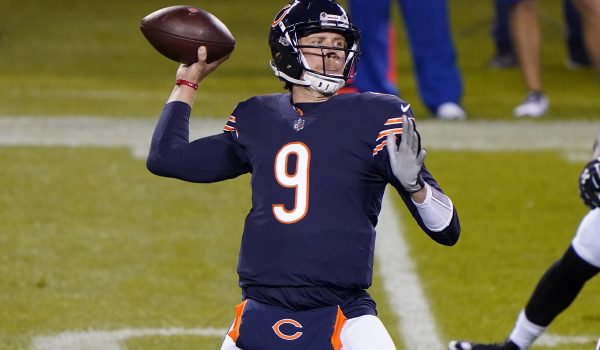 $50
100% Deposit Bonus up to $50!
CLAIM NOW
Use our promo code PICKSWISE50 or sign up using the claim now link. Terms and conditions apply. 18+. Live in one of the states where real money DFS is legal.