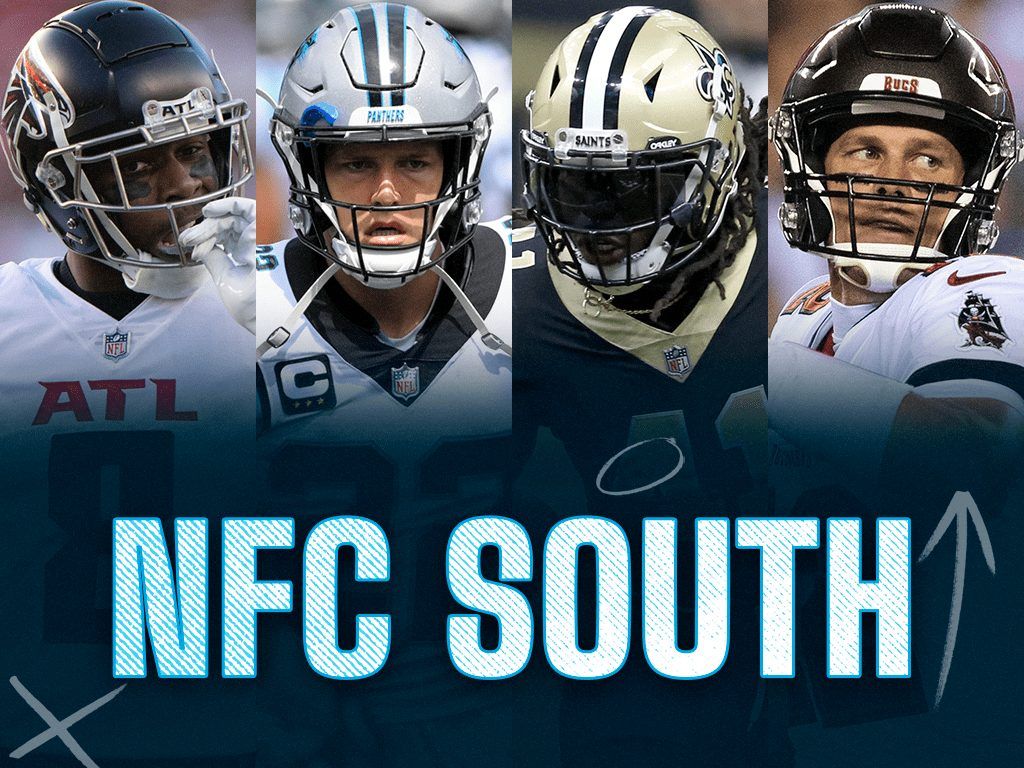 The 2022 NFL season is only one month away, which is why we have already analyzed pretty much every aspect of futures betting. The ultimate goal for all 32 teams, of course, is to lift the Lombardi Trophy. However, for now it’s time to break things down division by division – in this case the NFC South. This follows our previews for all 32 NFL teams.

Until Tom Brady left the New England Patriots for the Tampa Bay Buccaneers, the New Orleans Saints enjoyed a 3-year stretch of domination (2017-2019) in which they were largely untroubled in the NFC South. The Saints triumphed again in 2020, although the Bucs earned a wild-card spot and went on to win the Super Bowl (winning at New Orleans in the process). With the tide continuing to turn in 2021, Tampa Bay easily ended New Orleans’ 4-year reign atop the division. The Atlanta Falcons and Carolina Panthers have largely been innocent bystanders over the past half-decade and that is expected to be the case again in 2022.

But before dive into this one specific division, make sure to also check out all of our 2022 NFL futures content in the NFL tab. It includes our picks for the Super Bowl, AFC, NFC, MVP, Defensive Player of the Year, Comeback Player of the Year and Coach of the Year.

The other three teams in this division surely got a bit excited when Tom Brady announced his retirement in February. That excitement didn’t last long. Brady unretired in March, so a division that had suddenly opened up for grabs swung back in the Bucs’ favor – at least on paper. With Brady back, this is clearly the best team in the NFC South and arguably one of the best in the NFL. Although the offensive line will look a lot different in 2022, the additions should at least make up for the subtractions if not even improve the situation. Julio Jones is past his prime, but he can be an important piece for Brady with Chris Godwin returning from a torn ACL, making him something of a question mark. Tampa Bay’s defense will be more than good enough to compliment a Brady-led offense, so Super Bowl hopes are once again high for this franchise.

New Orleans stood the most to gain from a Brady departure. The Saints won 4 straight division titles from 2017 through 2020 and may have been a trendy pick to regain the throne if the Bucs had been forced to go in a different direction. Now the Saints are longshots for a division title. And to be honest, they probably shouldn’t be contending for such based on the makeup of this squad. Sean Payton is out as head coach and Dennis Allen is in. Allen has been great as a defensive coordinator, but in his only previous head-coaching stint he went a horrendous 8-28 in two-plus seasons with the Oakland Raiders. Allen has a decent roster to work with in New Orleans, but Drew Brees ain’t walkin’ through that door. Tyrann Mathieu is a strong addition for the defense, but even with Alvin Kamara at running back there are a lot of questions surrounding the offense.

The Panthers have won exactly 5 games in 3 consecutive seasons. It wouldn’t be a big surprise if that trend continues, as this team is not expected to be anything special. There is one obvious way in which Carolina could at least improve to some extent: Christian McCaffrey staying healthy. He was unable to do so in either 2020 or 2021, which severely limited the Panthers from an offensive standpoint. Regardless of McCaffrey’s status this year, there is currently a QB quandary in Carolina. Baker Mayfield was acquired during the offseason and he is battling with Sam Darnold for the starting job. Does either one inspire much confidence? Not really. A lot of things will have to go right for head coach Matt Rhule to take his team to the playoffs in year three.

Based on the Super Bowl odds, the Falcons are expected to be one of the two worst teams in the entire NFL. Only the Houston Texans are a longer shot to lift the Lombardi Trophy. The Matt Ryan era has come to an end, with the QB reins being handed over at least temporarily to Marcus Mariota and perhaps in the future to current rookie Desmond Ridder. Calvin Ridley is suspended for the year because of putting a parlay together (the Falcons were included!), so they felt the need to use their first-round pick on a receiver (Drake London) even though there were – and still are – holes all over the field. This Atlanta roster is surely one of the worst in the sport. But keep in mind that it was also pretty bad last year (even with Ryan) and Smith still led his squad to 7 wins.

The Saints missed the playoffs last year and don’t figure to be much better – if at all – in 2022. They play only one of their first 3 games at home and that’s against the Bucs. Their closing stretch is the Ravens at home, the Steelers on the road, the Rams at home and then at the 49ers and Bucs. In between those stretches New Orleans has to go up against the Bengals (at home) and the Cardinals (on road). I can see two wild-card teams coming from the NFC West and Philadelphia or Dallas has a good shot at snagging the other. In turn, if the Saints do miss the playoffs then it’s safe to say the Bucs are going to win the division. After all, the Panthers and Falcons are unlikely – at best – to be NFC South champions. As such, even on a -250 number I still like the value on Tampa Bay to capture a second consecutive division title.