NFL Playoffs AFC Championship reaction – Despite loss, the future is bright in Buffalo 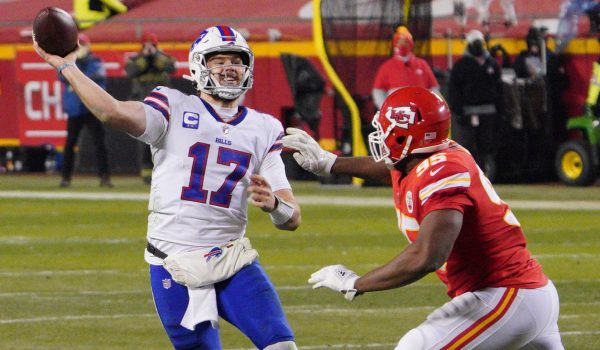 The Buffalo Bills had a magical season, but in the end they didn’t have quite enough to upset the Kansas City Chiefs, falling 38-24 in the AFC Championship Game. While it was a disappointing end to a storybook campaign, they’ve got plenty to look forward to in Buffalo. The Chiefs on the other hand are headed on to the Super Bowl, where a date with Tom Brady awaits.

Buffalo got out to an early lead thanks to a muffed punt from the Chiefs, but Kansas City rebounded quickly and the game was never really in doubt the rest of the way. Let’s break down the two biggest takeaways from the AFC Championship Game

The future is bright in Buffalo

There are no moral victories in football, and Bills fans will surely be hurting after this one. But at the same time, if you’d told them at the beginning of the season an AFC Championship Game and two playoff wins were in the cards, they’d have been thrilled. Not too long ago, people were talking about how Josh Allen was a bust.

Now, he’s playing at an MVP level and is one of the best quarterbacks in the league. The trade for Stefon Diggs has given them an elite offense, and I don’t see any reason to believe it’ll decline next season. Diggs, Cole Beasley, and John Brown will all be back next year. Dawson Knox has shown plenty of flashes, is still only 24, and looks like he could develop into a top-tier tight end.

Buffalo’s defense lost some key guys and took a bit of a step back this year, which makes me think this team still hasn’t reached its ceiling if Sean McDermott can get his unit back to its 2019 level, which he should be able to. Bills fans should also rejoice in the fact that Brian Daboll didn’t land a head coaching gig this offseason, ensuring the offensive coordinator is back in Allen’s ear for at least another year. This team will be back.

The Chiefs are peaking at the right time

There was a lot of panic in the media about the way the Chiefs closed their season. Clearly, nobody in the locker room was panicking. Kansas City was lackluster down the stretch, failing to cover a spread over the final couple months of the regular season. But in hindsight it’s clear the team was just coasting since they weren’t in real danger of losing the one seed in the AFC, and they’ve now kicked things into a higher gear.

They’re peaking at the right time, playing their best ball of the season. The secondary was underrated all season long, and their corners were lockdown against Buffalo’s imposing group of receivers. The pass-rush also was dominant, getting consistent pressure in Allen’s face.

That’ll be a key against Brady and the Bucs, as Tampa’s offensive line has been playing at a really high level recently. Turf toe or no turf toe, Patrick Mahomes still looks unstoppable in this offense. He carved up Buffalo, and I don’t see anything to suggest he won’t do the same to the Buccaneers’ young secondary.

We all started to take it a bit for granted and stopped giving them their due, but the Chiefs were the best team in the league this season from start to finish.

NFL 25 days ago
Who will trade for Carson Wentz? Odds, best bets and predictions