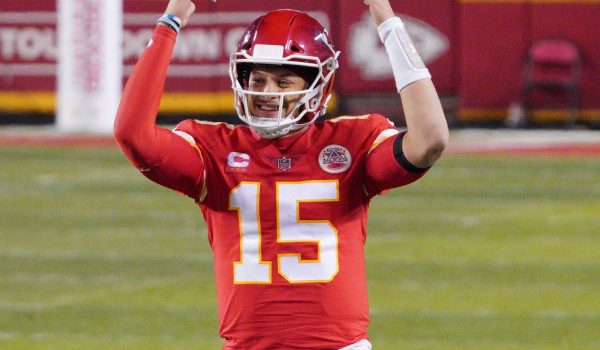 The Kansas City Chiefs will take on the Tampa Bay Buccaneers at Super Bowl LV, and so far the majority of the public has been siding with the reigning champions.

Since betting opened on Sunday night, the Chiefs have been all the rage and sportsbooks have reported a number of mega-money bets on Patrick Mahomes to once again lift the Vince Lombardi Trophy.

In fact, BetMGM reported on Tuesday that they have so far taken three six-figures bets totalling over $400,000 take all involve a Kansas City victory. That includes $180,000 on a Chiefs Money Line victory at -180, which would win the bettor $100,000.

BetMGM’s vice president of trading Jason Scott said: “If early betting is any indication, the public and some of our larger betting customers love the Chiefs. From the early looks of it, the book will likely need the Buccaneers to win the Super Bowl.”

That sportsbook has also reported 76 percent of spread bets so far have been on the Chiefs -3.5 and it is a similar story with DraftKings, where 77 percent of bets are siding with Andy Reid’s men. Make sure you check out our full Super Bowl preview, where our expert is among the masses backing Kansas City.

Tyreek Hill is going OFF against the Bucs 🤯

However, DraftKings have also highlighted that 56 percent of money line bets have been on the Buccaneers, proving that there are some early bettors who have faith in Tom Brady to win a magnificent seventh Super Bowl.

As for the game totals market, 83 percent of bets so far have been on there to be over 56.5. With the way both offenses have played, it’s easy to understand why.

As always, the result of the coin toss is one of the biggest betting markets of the Super Bowl. There is no skill to predicting what the outcome will be, only luck, but it does provide bettors with a wager that will be settled early to whet their appetite for the remainder of the night.

BetMGM has reported that the early money has been on tails, and sports trader Darren Darby said: “The coin toss is a very popular Super Bowl prop bet. Customers love early action and the coin toss gives them a chance to win before the game even starts. Tails is often the most popular side of this prop — as the old saying goes, ‘tails never fails’.”

Indeed, tails has dominated the coin toss in recent years, having been the result in six of the last seven Super Bowls. Can that trend continue? Make sure you check out our guide on the Super Bowl coin toss which includes odds, picks and predictions for the biggest flip of the year.

NFL 5 days ago
With Aaron Rodgers officially holding out, is it time to Love or hate Packers on the betting market?