Who will the Philadelphia Eagles take with their first pick in the NFL Draft? 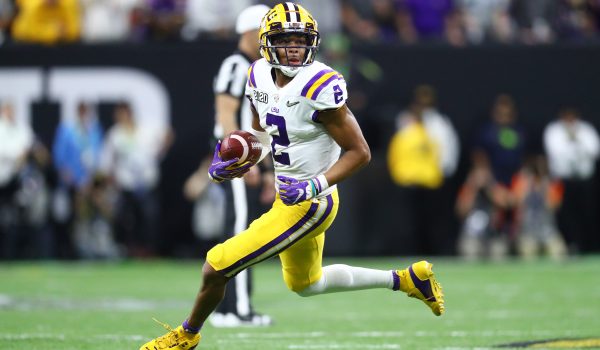 Who will the Philadelphia Eagles draft with their first pick in the 2020 NFL Draft at No. 21 overall, barring no trades? Well, it is safe to say that Philadelphia’s most significant position of need is wide receiver. There is a whole host of first-round WR talent, so Philly should have no trouble finding someone it wants in the middle of the first round. If a surprise happens, it will likely be either in the form of a cornerback or a linebacker.

Bet on who the Eagles will draft first

You can bet on the position of the player that the Eagles will draft first at DraftKings, the current betting odds are:

The first round of the 2020 NFL Draft is going to be an LSU party, and why not? Generally, this is how things go from college to the NFL; a national powerhouse wins the title and then sends a mass exodus of players to the next level. The Tigers are doing that this time around, starting with quarterback Joe Burrow to the Cincinnati Bengals at No. 1 and perhaps eventually seeing Jefferson go to the Eagles at No. 21. Jefferson is coming off an incredible 2019 campaign in which he caught 111 passes for 1,540 yards and 18 touchdowns. In the last three games of the season, the junior had 30 receptions for 448 yards and five TDs. Jefferson stands at 6’2’’ and 202 pounds, and he ran a 4.43 in the 40-yard dash at the combine. Philadelphia lost Nelson Agholor earlier in the offseason, and its receiving corps was already one of the worst in the entire league.

Could CeeDee Lamb, Jerry Jeudy, or Henry Ruggs III fall to Philadelphia? Although one member of that trio enduring a slide is not entirely out of the question, there is probably going to be a considerable run on receivers in the 11-20 range. The New York Jets, Las Vegas Raiders, San Francisco 49ers, and Denver Broncos are all in that mix. Of course, Lamb, Jeudy, and Ruggs also become even more realistic possibilities if the Eagles decide to trade up.

Florida cornerback C.J. Henderson will likely be gone when the Eagles assume control of the board, but Terrell could be there if they want to improve the secondary. If Lamb, Jeudy, and Ruggs are all gone, Philadelphia may have a decision on its hands. If Jefferson is also off the board, the defense suddenly becomes the obvious way to go. Terrell, who picked off five passes over his final two seasons at Clemson, could start right away in Philly ahead of Avonte Maddox. Linebackers Kenneth Murray (Oklahoma) and Patrick Queen (LSU) may be in play, as well.